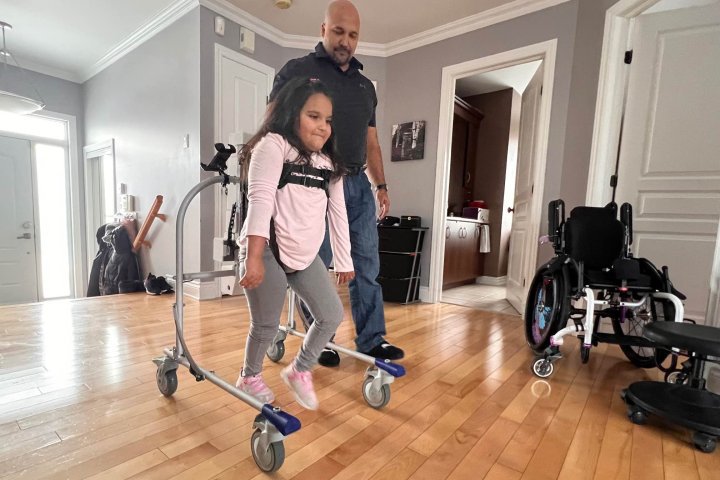 Mila Goolab, a seven-year-old girl with a neurological condition that affects her mobility, isn’t able to walk on her own — but a specialized new device gives her more freedom and the movement she has worked so hard to have in her young life.

The equipment, called Levity gait trainer, is different because while it helps Mila walk, it also gives her the ability to move her arms and use her hands freely. With a harness to support her weight and no arm rests, the young girl from Montreal’s south shore says her hands don’t hurt like they do when she uses a traditional walker.

“I can run sometimes,” she said while beaming. “I feel happy.”

Mila isn’t the only one benefitting from the device. The Montreal startup company behind Levity says it can help children with mobility issues to walk again, but patients say it is expensive and not covered by Quebec’s government-run health insurance board.

Since then, Mila has worked hard to regain mobility but she still needs to use wheelchair. In fact, Mila shyly stole the spotlight when she joined her hero P.K. Subban on ice earlier this month at the Bell Centre, when the Montreal Canadiens honoured him. They have been with her hockey star’s foundation since she first became sick.

“It was exciting,” Mila said, while clutching her P.K. doll modeled after and signed by Subban.

Mila’s dad says she should be doing therapy at least five days a week and the family has also travelled to the United States for treatment when needed. But the costs of Mila’s different ongoing therapies are steep, especially as they cover more of it out of pocket.

“They just cut back our physio and occupational therapy by 50 per cent before Christmas,” Goolab said. “It’s minimum $120 per hour. So as you can see, five hours a day (and) five days a week, it can get very, very costly quickly.”

But Goolab says since Mila has started using the Levity gait trainer in October 2022, there has been remarkable progress.

“As a parent it’s a beautiful product because I know when she’s doing her work in this machine, it’s done properly,” he said.

The best part, aside from the progress, is that Mila enjoys using it.

“She loves walking in it because she feels as if she’s a little bit more normal,” Goolab said of his daughter.

It also helps substitute for what’s missing when it comes to treatment. That’s part of the goal of the data-driven equipment, according to Ora Medical co-founder Sarah Lambert.

The idea is to provide more access to walking assistance tools and help patients get rehabilitation in their own home. Levity also comes with a mobile app to allow the patient and physiotherapist monitor progress and make adjustments if needed.

“We really help get patients back to walking,” said Lambert, a former physiotherapist who is now an engineer. It also gives them the ability to do other tasks while upright, such as cooking or playing.

Mila’s progress has come at another steep price — but now her family, advocates and Ora Medical are pushing for Quebec’s health insurance board to cover the costs. The gait trainer costs upwards of $8,000.

Kimberley Kotar, president of the Canadian Transverse Myelitis Association, said there shouldn’t be any kind of cap on physiotherapy to help patients. She had to go into debt to physically recover, which took five years.

“With this disease, the sooner you start therapy the better it is for you,” Kotar said.

Ora Medical is trying to get the Levity gait trainer covered by the Quebec government so they can help other patients, too. In the meantime, Mila’s family is looking to launch a fundraiser to help cover the costs.

Global News has reached out to the Quebec Health Ministry for comment on the initiative.