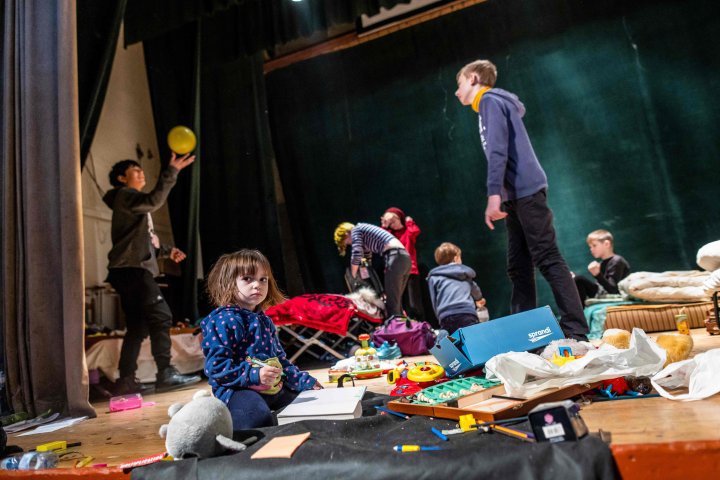 Ukrainian mothers and their young children found shelter in an ornate theater in the Polish border town of Przemysl on Saturday, where they were able to get some rest after their harrowing journey.

For Tanya, a 34-year-old from Berdychiv in northern Ukraine, it was a relief to finally have some help with her five young children after their long trip to Poland.

Tanya, who did not give her last name, had stayed in her home until it was no longer possible to shield her children from the war.

“I tried to protect them from all of this. When the alarm sounded, I covered the windows with blankets so one couldn’t hear it. My small ones made up a monster, the siren monster,” she said.

Her children ran around her as she stood inside the theater, which is tucked inside the Polish city’s Ukrainian cultural center. There were about 50 refugees sleeping side by side under borrowed blankets on fold-out cots in the theater.

Children in colorful clothes danced and played on the stage flooded by theater lights as their exhausted mothers chatted closely nearby.

In a makeshift kindergarten next to the theater, Olga Pavlovska from Kryvyi Rih in central Ukraine said she was relieved to finally be in a quiet place without air raids and sirens.

“Here, we are at least safe. No air raid alerts, no turmoil,” said Pavlovska, 28, as her two rambunctious sons chased each other around a table and knocked over a box of toys.

“My child slept very badly the first night. He woke up a lot, cried a lot, but now everything is good. He slept very well, really very well. Right Vovka?” she asked one of her sons.