Trudeau calls for ceasefire as violence between Israel and militants escalates 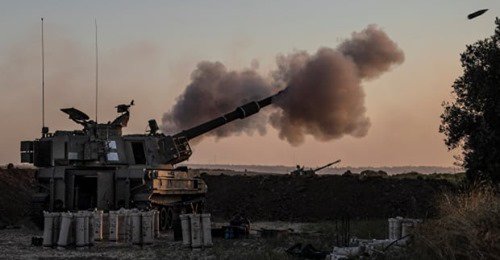 Prime Minister Justin Trudeau is calling for a ceasefire between Israel and militants in the Gaza Strip today and is promising to work with allies to "de-escalate the situation" in the region.

"Our hearts go out to Israelis, Palestinians, for the violence that is surrounding them right now. We've all seen the tragic images, families, innocents, kids affected. It needs to stop. That's why Canada is calling for a cease fire," Trudeau told reporters in Ottawa today.

"We will work with the international community to de-escalate the situation and to move forward so there is no more loss of civilian life."

The prime minister issued the call as Israel bombarded Gaza with airstrikes and Palestinian militants resumed cross-border rocket fire today following a brief overnight lull. The United Nations sent a small fuel convoy into the enclave during that lull in fighting; it says 52,000 people have now been displaced there.

Israeli leaders said they would press on with an offensive to destroy the military capabilities of the armed factions Hamas and Islamic Jihad, even as the United States, Canada and other world powers call for an end to the bloodshed.

Conservative foreign affairs critic Michael Chong's office stopped short of backing a ceasefire in the region but did express concern about the violence.

"Canada's Conservatives have been clear that Israel is one of Canada's closest allies and we support Israel's right to defend itself," Chong's office said in a statement. "Dialogue and peaceful negotiation are the only path forward towards a settlement between Israelis and Palestinians and an eventual two-state solution. We urge calm and sincerely hope that hostilities cease."

Hamas began firing rockets eight days ago in retaliation for what it said were Israeli abuses of the rights of Palestinians in Jerusalem. Palestinians in the Israeli-occupied West Bank and members of Israel's Arab minority staged a general strike today in solidarity.

'We're focused on the firing': Israel
Israel said more than 3,450 rockets have been launched at it from Gaza; some fell short and others were shot down by its Iron Dome air defences. On Tuesday, the army said, a soldier was slightly injured when a shell was fired after Israel allowed the fuel convoy into Gaza. It says its forces have killed around 130 Hamas fighters and another 30 from Islamic Jihad.

The Israeli military's chief spokesperson, Brig.-Gen. Hidai Zilberman, said it would not wind down offensive operations in the near term. "The IDF [Israel Defence Forces] is not talking about a ceasefire. We're focused on the firing," he told Army Radio.

The call for a ceasefire marks a change in messaging for the Trudeau government, which issued a statement through Global Affairs Canada over the weekend "urging all parties to take steps to immediately end all violence, prevent further loss of life, protect all civilians, and de-escalate tensions."

Despite that support, Canada urged Israel to demonstrate restraint and to "act in accordance with international law."

Egypt and UN mediators have stepped up diplomatic efforts and the UN General Assembly will meet to discuss the violence on Thursday.CBC