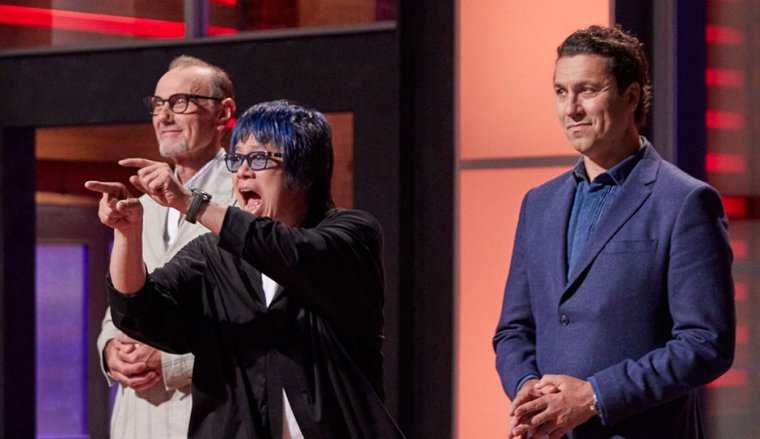 It’s no secret the past year has been tough on the restaurant business, but seeing the passion of the 12 former MasterChef Canada (Sundays, 9 pET on CTV) competitors as they returned to the MC kitchen for one more chance to win was purely infectious. Every single one of them had pursued some kind of culinary career since their last time on the show, and now that they’re back, expectations are through the roof!

That doesn’t mean this batch won’t rise to the challenge. As judges Claudio Aprile, Michael Bonacini and Alvin Leung noted, the contestants all came with their own knifes, a bit of emotional baggage, and a hunger to right what they did wrong the first time around. Luckily for them they got their chance straightaway.

Facing the past on a plate
After a brief introduction catching viewers up with all of the exciting things these contestants have been up to for the past few years (culinary school, opening their own shops, starting families), the 12 returning competitors were thrown right back into the action.

In the famed MasterChef kitchen, they came face-to-face with the hardest Mystery Box challenge probably ever featured on the history of this show: reinvent a past mistake. That meant each amateur chef (they’re not really home cooks anymore, are they?) had to stare down the worst plate that they presented the judges with in the past. And for some of them, that meant redoing the dish that sent them home. Talk about the ultimate redemption—if you’d been sent home from a show like this, how long would you stay awake at night going over what you should have done differently in your head?

This time, with $100K on the line (not to mention a cool kitchen appliance prize pack from Miele), it was all business as the hour started counting down. Season 4 runner-up Thea went straight to work on perfecting the chicken dish that cost her the game; April Lee started whipping up a cream to knock Alvin’s famous coloured kicks off; and Season 3 runner-up Jeremy proved he learned his lesson about monkfish the first time around by giving it the lobster treatment on Sunday night.

It was a similar story at every chef’s station as the contestants sweated it out in an attempt to showcase their own versions of technique, innovation and creativity. And all in just one hour. The title of this season is Back to Win, after all.

Crying over spilled milk
It didn’t take long for the physical tears to spill over, however, as Jen worried about her steak and potato pave, which the judges loved but admitted needed something to cut through all of the rich flavours. It was a different story for April Lee, whose dessert broke, forcing her to throw something on the plate with about 20 seconds left.

Then there was Thea, who had to figure out a new plan for her crispy chicken when she discovered her stove wasn’t set at the right temperature. Meanwhile Marissa, who was intent on recreating a whole plate of different proteins, may have overshot with her ambitious plans; and Dora underwhelmed when she revealed she was plating a fancy sandwich with her famous sauces. In other words: the pressure cooker was getting to more than a few returning chefs.

But then there were the immediate standouts. Mai, who has since opened up her own dumpling business, impressed with a redeemed salmon dish, while Season 5 runner-up Andy proved that he has since learned the proper way to cook and plate lobster.

Then there was Season 6 runner-up Andre, the frontline worker who had to put all of his foodie dreams on hold when the pandemic hit. His uni amuse bouche was gorgeous, and judging by the way Alvin picked it up with both hands, stuffed it in his mouth, and sang its praises mid-chew, it must have tasted pretty darned great too.

It was no real surprise when Andre won the first redemption round and earned himself a top-secret advantage next week, but more importantly, the dish definitely set the tone in terms of expectations going forward.

The sandwich stands alone
With so many elevated dishes to choose from, the judges knew they had to call forward the three plates that showed the least refinement and ambition. That meant April Lee, Marissa and Dora were in the bottom. But while April Lee’s plate was messy, the flavours were still there, and Marissa’s true culinary crime was being overambitious.

That left Dora and her underwhelming sandwich at the bottom of the pack, and so she had to fold up that apron and leave for a second time. Like the true competitor that she is, she took it all in stride.etalk