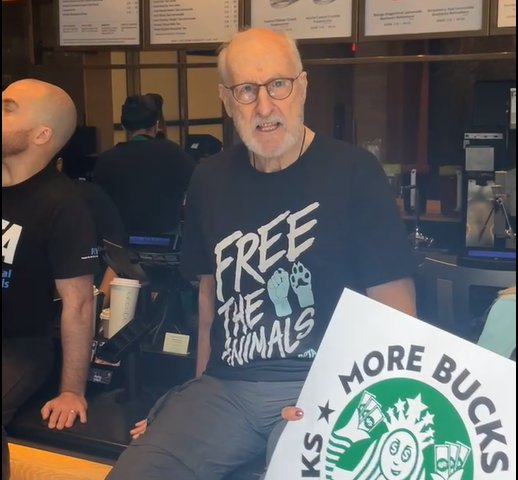 James Cromwell, Oscar-nominated actor and animal rights activist, superglued himself to a counter at a New York City Starbucks on Tuesday in protest against the company’s surcharge on vegan milks.

The protest was organized by People for the Ethical Treatment of Animals (PETA), of which Cromwell, 82, serves as an honorary director.

PETA livestreamed the protest, which lasted about half an hour, showing Cromwell sitting on the front counter of the Starbucks wearing a “Free the Animals” T-shirt. He and other protesters held signs asking Starbucks to “stop charging more for vegan milk.”

“There’s no reason for it except greed,” Cromwell told customers at the Starbucks on Broadway between West 39th and 40th streets. “Will you stop charging more for vegan milk? When will you stop raking in huge profits while customers, animals and the environment suffer?”

Cromwell was nominated for a best supporting actor Oscar in 1995 for the film Babe. He currently stars as the anti-capitalist Uncle Ewan Roy on the hit HBO show Succession.

“Starbucks claims that it wants to be more sustainable but it discourages customers from choosing sustainable products,” he said during a speech at the chain café. “The company claims to be committed to inclusion and diversity but it still discriminates against those who can’t have dairy.”

During the protest, Cromwell and protesters chanted, “Save the planet, save the cows, end the vegan upcharge now!”

Depending on the city, Starbucks charges around 50 to 70 cents more for dairy alternatives like soy, oat and almond milks. The surcharge was recently dropped in the U.K. but still remains in Canada and the U.S.

“My friends at PETA and I are calling on Starbucks to stop punishing kind and environmentally conscious customers for choosing plant milks,” Cromwell said in a press release from PETA. “We all have a stake in the life-and-death matter of the climate catastrophe, and Starbucks should do its part by ending its vegan upcharge.”

After around 15 minutes of protest, uniformed New York Police Department officers entered the Starbucks and talked to one of the PETA protesters, though they appeared to let the protest continue. They returned after another 10 minutes and started directing protesters outside, saying, “You guys can do everything you want outside.”

After about half an hour, the video shows Cromwell using a knife to scrape the glue off his hand, removing himself from the counter.

PETA confirmed that no one was arrested.

Starbucks has not yet responded publicly to the incident.