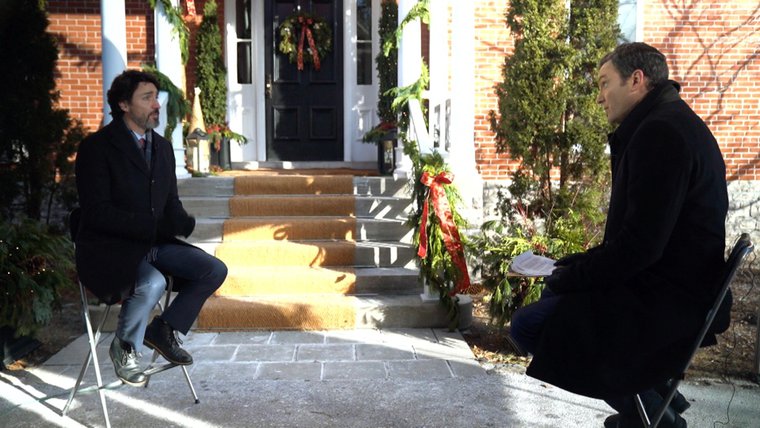 OTTAWA -- The federal government’s plans to add billions to the deficit to stimulate the economy will end up being a “huge advantage” for Canada, according to Prime Minister Justin Trudeau.

In a year where the word “unprecedented” has been used a lot, the federal government was in the driver’s seat for a series of major decisions, from how to respond to the threat and then reality of COVID-19 in Canada, to what fiscal measures would be necessary to keep the economy afloat.

In a year-end interview with CTV News’ Evan Solomon, Trudeau offered what he saw as his biggest shortcoming in the federal pandemic health response, but offered no apologies about his government’s approach to the economy.

The federal government plunged into a record deficit in an effort to prop up businesses and support Canadians through the COVID-19 shutdowns, and with the potential of a $400-billion deficit in the coming year, there are plans to spend up to $100-billion more to stimulate the economy over the coming years, rather than starting to scale back with austerity measures.

The prime minister defended his government’s approach as one that will put the country on better footing coming out of the COVID-19 recession.

“The question is, who goes into debt? Do people put it on their credit cards at 19 per cent interest? Or does the federal government, which right now is borrowing at close to zero per cent interest, take on that debt to make sure that people can hold through this pandemic? What that leads to is, when the pandemic is over, when vaccines are there and we're rebuilding, we actually have less to rebuild and more to restart because people have been able to hold, and that difference is going to be a huge advantage for Canada,” he said.

Asked whether the federal government has overshot the amount of support that’s gone from federal coffers to Canadians, given indicators that household savings have increased during the pandemic, Trudeau said no.

“When you come out of a recession you need stimulus to get things going again to accelerate the return to balance, and yes the fact that Canadians who would normally have gone out to a restaurant maybe once a week over the past many months, haven’t done that and therefore have saved a little money,” Trudeau said.

“I can tell you, when this is done and we're allowed to go back to our local favorite pub or restaurant, people are going to rush out and that's going to be a great part of the recovery. But that's not going to be enough.”

Asked if there will ever be a plan to get back to balance, the prime minister said “absolutely,” and that the spending happening right now is in the context of COVID-19, but offered no timeline for when the federal government will start paying down the deficit.

REUSING PPE 'SHOULDN'T HAVE HAPPENED'
While the federal Liberals continue to chart their economic course, Trudeau said a lesson learned early on in the pandemic is what sent them on a different path when it came to procuring vaccines: The struggle to secure enough personal protective equipment (PPE) for Canada’s frontlines.

Asked what he would change if he could have a do-over, Trudeau’s response was PPE procurement.

“We knew that we had to ensure the protection of our frontline workers. I don't think we understood or expected to see the kind of race for PPE, the international struggle… happening on the tarmac in China and elsewhere, of people trying to get PPE,” said the prime minister.

“We ended up being OK, but there are stories of frontline health workers who had to bring their masks home and wash them, that shouldn't have happened,” he said.

Trudeau said it was this harsh wakeup call that prompted the government to move quicker on securing vaccine dose deals. Canada’s secured more doses per capita than nearly all other nations, and should there be excess, the prime minister has committed to sharing with countries who don’t have enough. CTV News