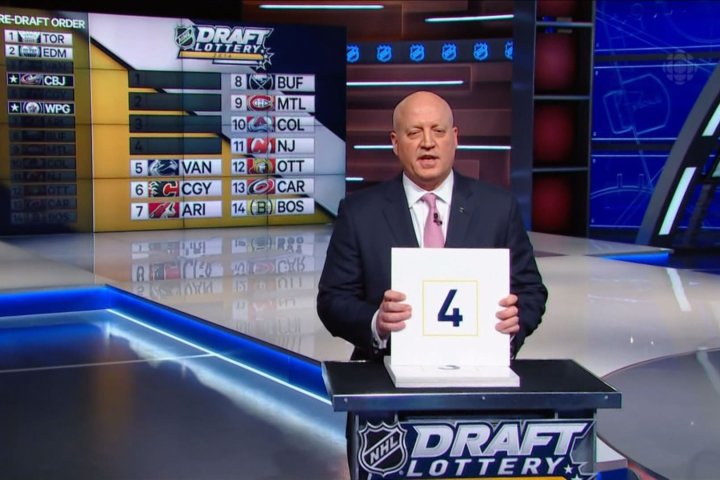 The Montreal Canadiens won the NHL’s Draft Lottery for the first overall selection and the Winnipeg Jets will pick in the 14th slot in the upcoming 2022 NHL Draft.

The league held its annual draft lottery on Tuesday to determine the order of selection for the first 16 picks, and with the NHL recently tweaking the lottery rules, the Jets had no chance of getting the number one overall selection.

Teams can now only move up a maximum of 10 places, and the Jets had the 14th worst record in the NHL, so their best case scenario was winning the fourth overall pick. But even those odds were pretty slim as the Jets had just a 1.5 per cent chance of moving into the fourth drafting position.

Only the 11 lowest finishing teams were eligible to receive the first overall selection.

The New Jersey Devils moved up three places to get the second selection, and they’ll be followed by the Arizona Coyotes, Seattle Kraken, and Philadelphia Flyers.

It’ll be the sixth time the Canadiens own the top overall selection and the first since they took Doug Wickenheiser first overall in 1980. The Habs selected third in the 2012 and 2018 drafts.

After finishing dead last, the Canadiens had the best chance of winning the lottery with an 18.5 per cent chance of getting the top selection.

The Coyotes were next with a 13.5 per cent chance, followed by the Kraken at 11.5 per cent.

Shane Wright of the OHL’s Kingston Frontenacs is projected to go first overall as the top ranked North American skater. Owen Power went with the first pick to the Buffalo Sabres last year.

The Jets were last in the draft lottery in 2020 when they received the 10th overall selection to select forward Cole Perfetti. Winnipeg chose Chaz Lucius 18th overall in 2021.

The 2022 NHL Draft is scheduled for July 7-8 at the Bell Centre in Montreal. The last time a team in the host city held the first overall pick was back in 1985 when the Toronto Maple Leafs chose Wendel Clark.