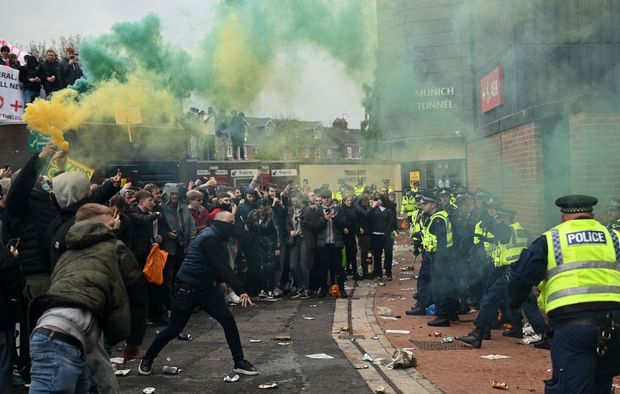 Fans’ fury over aborted plans for a European soccer Super League boiled over on Sunday when protesters broke into Manchester United’s home stadium and forced the postponement of the day’s game against Liverpool, marking the latest eruption among English soccer fans urging their clubs’ billionaire owners to sell the teams.

The afternoon had begun with thousands of fans gathering outside Old Trafford in protest—just as they have over the past two weeks at Arsenal, Liverpool, Chelsea and Tottenham—but took a chaotic turn as several hundred broke through security and barriers and reached the pitch.

The target of their anger was the club’s owners, the Florida-based Glazer family, which had signed up Manchester United last month to join a breakaway Super League of elite clubs that fans saw as nothing more than a power play by greedy billionaires. Though the project collapsed in 48 hours, the fiasco has re-ignited 16 years of animosity directed at the United owners for overseeing what fans see as a staggering decline in the club’s standing.

“Our fans are passionate about Manchester United, and we completely acknowledge the right to free expression and peaceful protest,” the club said. “However, we regret the disruption to the team and actions which put other fans, staff, and the police in danger.”

Hundreds of fans appeared to break into Old Trafford with little resistance as they overwhelmed the security contingent a little more than two hours before the scheduled 4:30 p.m. match. Fans have not been allowed at Premier League matches this season because of the pandemic, and security on the scene appeared to be light.

The protesters quickly reached the playing field inside the 76,000-seat stadium, where they set off flares and chanted for the Glazer family to sell off the club. One person could be seen making off with a corner flag.

“Apology not accepted,” read another.

The field was cleared in about an hour, but United, the Premier League and local authorities agreed that the match couldn’t go ahead.

“We understand and respect the strength of feeling but condemn all acts of violence, criminal damage and trespass, especially given the associated COVID-19 breaches,” the league said in a statement. “Fans have many channels by which to make their views known, but the actions of a minority seen today have no justification.” 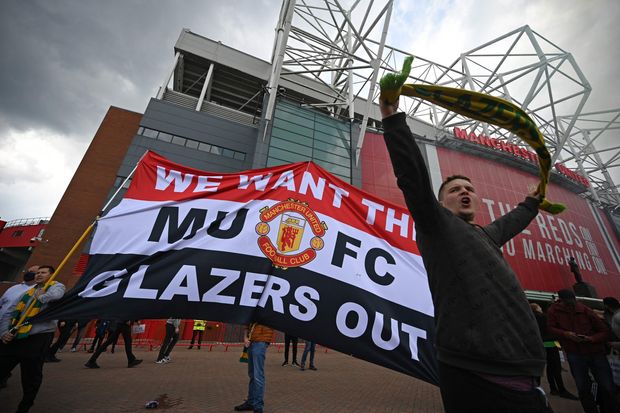 The scenes at Old Trafford were a more extreme form of what has unfolded at games of Super League-affiliated English clubs for the past two weeks. When United withdrew from the Super League on April 20, the club had said, “We have listened carefully to the reaction from our fans, the U.K. government and other key stakeholders.” But United’s exit did little to quell the fans’ anger for joining in the first place—or 16 years of simmering discontent.

Fans had turned against them almost immediately when Malcolm Glazer and his sons, who already owned the Tampa Bay Buccaneers, acquired United in a 2005 leveraged buyout that saddled the club with debt.

On the very first day members of the family visited the stadium, they had to be spirited into the offices via a blocked off tunnel in an unmarked van to dodge protesters outside chanting “Die, Glazers, die.” To this day, stickers left by supporters can be found on Old Trafford seats saying, “Glazers Out.”

The Glazers’ image hasn’t been helped either by their total silence in public. Though co-owner Joel Glazer hasn’t given an interview since speaking to United’s in-house TV channel in 2005, he was among the Super League leaders to issue a statement at its launch.

“By bringing together the world’s greatest clubs and players to play each other throughout the season, the Super League will open a new chapter for European football,” he said at the time.

But critics point to how far the club has fallen over the past decade. From being the most powerful team in England in the 1990s and 2000s, it is now unable to maintain a serious title challenge against the likes of Manchester City and Liverpool. United hasn’t won the Premier League since 2013, the final season under its legendary manager Alex Ferguson. Nor has it reached a Champions League semifinal since 2011.

“This club now—I know it looks great here—but if you actually go behind the scenes it’s rusty and rotted,” former United defender and Sky Sports pundit Gary Neville said on British television from inside Old Trafford. “If [the Glazers] put it up for sale now, the time would be right and it would be the honorable thing to do.”