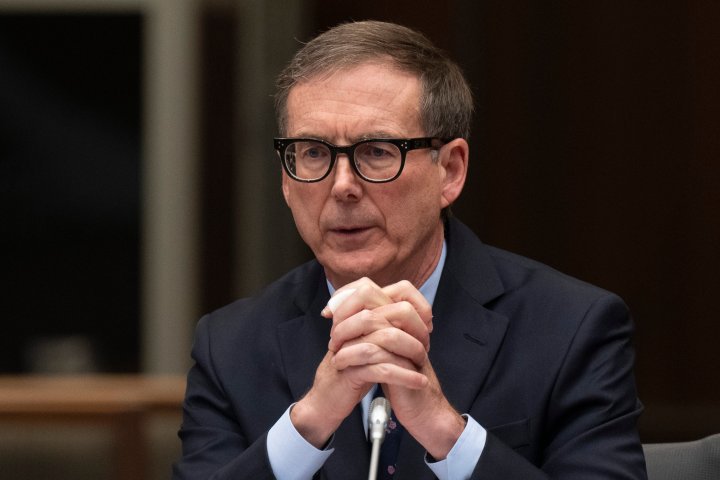 The Bank of Canada and the federal government could have taken their foot off the gas sooner when stimulating the economy during the COVID-19 pandemic, Governor Tiff Macklem said Wednesday, but he added that knowledge is only clear now with the benefit of hindsight.

Macklem and Senior Deputy Governor Carolyn Rogers spoke to the House of Commons’ Standing Committee on Finance Wednesday evening, where they were grilled by members of Parliament about the impact of higher interest rates on Canadians’ finances and on the central bank’s monetary policy decisions’ effects on inflation.

The bank’s benchmark interest rate has risen 3.5 percentage points since March in an effort to tamp down the rising cost of living, but Macklem said Wednesday that the Bank of Canada is “still far from its goal” of ensuring “low, stable, predictable” inflation.

The annual inflation rate held steady across Canada in October at 6.9 per cent — down from the peak of 8.1 per cent seen in June but still well above the central bank’s target of two per cent.

“This tightening phase will draw to a close. We are getting closer, but we are not there yet,” Macklem said.

The U.S. Federal Reserve, the Bank of Canada’s counterpart south of the border, has also suggested that the pace of rate hikes could soon slow, according to recently-released minutes from its meetings in early November.

But Macklem conceded Wednesday that inflation, while initially a globally-driven phenomenon with supply chain issues and the war in Ukraine, might not have gotten as bad if the central bank had stopped stimulating the economy sooner during the COVID-19 pandemic.

But in response to questions from Conservative Party MPs Marty Morantz and Andrew Scheer, Macklem acknowledged that stimulating monetary policy could have been lifted sooner.

“If we knew everything a year ago that we knew today, yes I think we should have started tightening interest rates sooner to withdraw the stimulus,” he said, adding that stimulus was “an important factor that generated a very strong recovery.”

Macklem ultimately did not label the Bank of Canada’s monetary policy response to the pandemic a failure on Wednesday. Instead, he called for a review of the bank’s own response to the economic uncertainty and how effective its tools were at mitigating the impact and recovery from the pandemic.

“When we get inflation all back down to two (per cent), I do think we’ll have to have a thorough review of how all our tools worked through this pandemic,” he said.

Morantz also asked Macklem if inflation would have been lessened if there were less stimulus from the federal government’s spending over the pandemic.

“If, for example, the deficit spending had been half of that — $250 billion instead of $500 billion — would inflation have been less?” Morantz asked.

Governments looking to provide inflation relief to Canadians should choose measures that are well-targeted and temporary, he added.

Conservative MP Adam Chambers asked the governor which of two options is a better way to deliver relief without fuelling inflation: direct transfers to low-income Canadians or energy relief packages.

In response, the governor said targeted and temporary measures fuel inflation less than broad-based ones.

“Policies aimed at mitigating the effects of inflation on citizens really need to be targeted, targeted on the most vulnerable, and temporary, temporary while this is an inflation problem,” Macklem said.

The federal government along with provincial governments have responded to high inflation with measures aimed at softening the blow on Canadians’ finances. While some measures have been targeted to lower-income earners, others have been broad-based.

The federal government recently temporarily doubled the GST rebate, a benefit that goes to low- and modest-income Canadians.

Provinces have also delivered relief, with some opting to send cheques out more broadly.

Most recently, Alberta Premier Danielle Smith announced a slew of inflation relief measures Tuesday, which include $600 payments per child for families earning less than $180,000 a year. The same income threshold and benefit applies to seniors.