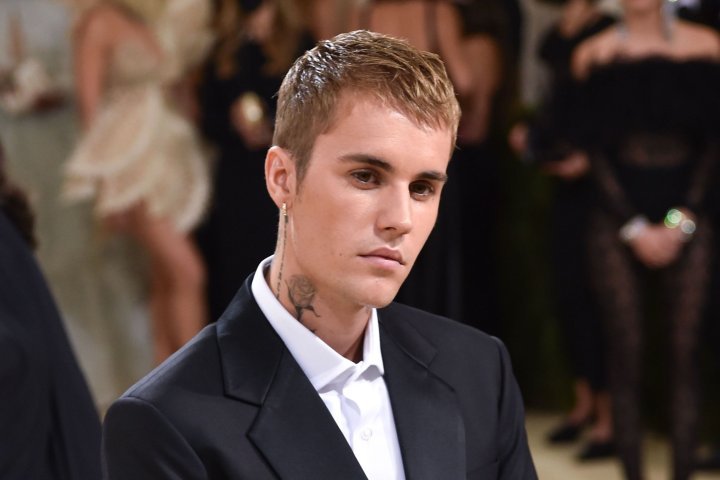 Justin Bieber is back to performing live after postponing the North American leg of his Justice World Tour, taking the stage for the first time in almost two months.

On June 10, the Canadian pop star announced to his fans that he was suffering from Ramsey Hunt syndrome, which caused half of his face to become paralyzed. But after taking time off to recover, Bieber, 28, was back performing at full force on Sunday at the Lucca Summer Festival in Italy.

In a video posted to Bieber’s Instagram page, the pop star arrived at the concert venue cheered on by his touring team. In a huddle with his crew and wife Hailey Bieber, 25, by his side, the Love Yourself singer announced, “We’re back.”

“What a great, great evening…. Wow. I love you guys, this is the sexiest group of people I know, I’m just so grateful to be back,” he said.

During the pre-show ritual, Bieber asked a member of his team, Ldubz, to lead a prayer.

“God, we’re so grateful for this moment. We’re thankful for protecting us in our travelling mercies. We thank you for the people here in Italy and this opportunity just to bring a message of love to these folks,” Ldubz said.

In another post, Bieber shared the emotional message he relayed to fans that night.

“Guys, I want to say thank you so much for having me back,” he said. “This my first day back, so good to be here.”

“As some of you guys know, the Justice Tour is about equality, it’s about justice for all no matter what you look like, no matter your shape, your size, your ethnicity — we’re all the same and we are all one.

“We know that racism is evil and we know that division is evil, it is wrong, but we are here to be the difference makers and I want to say thank you to each and every one of you guys for being part of this tour. Let’s enjoy the rest of the night,” Bieber concluded to a wave of cheers from the crowd.

The two-time Grammy-winner also shared a gallery of photos from his first performance back, telling his fans, “Luv u guys and I missed you.”

By most accounts, Bieber’s fans love and missed him as well, with concertgoers going silent during one of his songs to hear his vocals better.

Bieber shared his own concert footage on Wednesday with a video of him performing Confident at the Lucca Summer Festival.

Bieber continued his European tour in Denmark on Wednesday, posting a picture of the enormous crowd that came out to support him.

The photos and videos posted by Bieber show that despite his Ramsey Hunt diagnosis, he’s not slowing down.

Ramsay Hunt syndrome occurs from the reactivation of a viral infection, according to Dr. Charles Nduka, a consultant plastic, reconstructive and cosmetic surgeon in Brighton, England.

“Many people will have heard of chickenpox and chickenpox can cause a reactivation of the virus in the form of shingles, which is a rash that will form upon the body,” he said in an interview with Reuters. “If that rash occurs near the facial nerve, it can cause a sudden onset of facial paralysis, often linked with some pain around or behind the ear.”

After viewing a video of Bieber while he was suffering from facial paralysis, Nduka said he saw signs of early recovery in the pop star. To treat the syndrome, patients are commonly treated with steroids and antiviral medication, he said.

About 75 per cent of patients with the syndrome who receive early treatment are expected to make a full recovery, he added.

— With files from Reuters