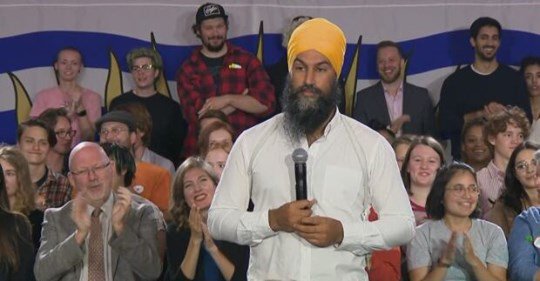 NDP Leader Jagmeet Singh told a town hall audience in Victoria that he was serious when he said that he hopes U.S. President Donald Trump is impeached.

Asked Friday by CBC News if it was wise for someone running to be prime minister to joke, as he did the previous evening, that he hoped Trump would be impeached, Singh replied, "I wasn't joking."

The line garnered applause from the audience.

On Thursday evening, the NDP leader said he hopes Trump "gets impeached" when asked what would he say first to the U.S. president if he was prime minister.

"I hope he gets impeached before I get to speak to him," said Singh, while hosting a town hall event in Nanaimo, B.C. "I say that a little tongue-in-cheek."

'I hope he gets impeached,' NDP leader jokes about Donald Trump
ANALYSISWhich party would have the clout in a minority Parliament?
What you need to know to vote in Canada's federal election
Singh said it is "disgusting that the president could inflame hatred against people and be so divisive."

"It's horrible that someone in a position of power like him would allow for kids to be stripped from the arms of their parents, from their moms," he said. "That needs to be denounced."

Singh has already heavily criticized Trump for the U.S. government's separation of migrant children from their parents in immigration detention centres at the U.S.-Mexico border.

"You can't allow someone like that to do that without any sort of repercussion, without anyone else condemning that," Singh said Thursday night. "And I condemn it."

On Saturday morning, when asked about how his comments could impact the U.S. relationship with Canada, Singh said he thinks Canadians want strength.

"Canadians expect to have someone who's going to stand up to Mr. Trump," he told reporters.

"Canadians don't want someone … who is going to back down from a bully."

Singh's comments on impeachment
Singh is the first of the Canadian party leaders to comment directly on the possible impeachment of Trump. But his position seems to have evolved over the past four days.

"Congress members will make the decision," Singh said in French on Wednesday outside Vancouver's city hall during a media conference. "I think there's a lot of proof to move forward with these proceedings."

By contrast, Liberal Leader Justin Trudeau and Conservative Leader Andrew Scheer this week simply declared they would keep an eye on how things evolved when asked how they thought the impeachment proceedings may affect ratification of the renegotiated North American trade deal.  CBC