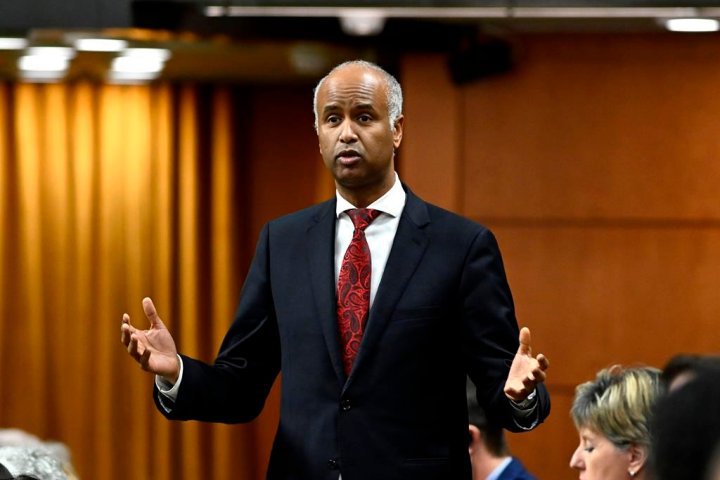 Housing Minister Ahmed Hussen’s office admitted Thursday night that his senior staffer is the sister of the director of a foodie communications firm that received $93,050 in constituency funds.

Hussen’s office confirmed that his director of policy, Tia Tariq, is sisters with Hiba Tariq, the director of Munch More Media, the company that has been receiving lucrative contracts to help the York South—Weston MP reach out to constituents.

However, Hussen’s office said the arrangement was disclosed to the federal Conflict of Interest and Ethics Commissioner.

“(Tia Tariq) has not been involved at all in any of the ways that Munch More Media assists Minister Hussen as a member of Parliament to his constituents,” said Brittany Hendrych in an interview with Global News Thursday night.

“We take these obligations very seriously when it comes to this … Everything — it was disclosed and the rules were followed in this case.”

Lobbying records show Tia Tariq has been working with Hussen since at least 2017, when he was minister of immigration, and has held a number of positions with Hussen’s office since. She now serves as Hussen’s director of policy.

Hiba Tariq, her sister, is the director of PR firm Munch More Media Inc., a foodie communications firm in Toronto. In a December 2015 Instagram post, Hiba tagged a fellow Instagram user, identifying them as siblings.

The contracts coincide with Tia Tariq’s time as a senior adviser to Hussen.

Hussen declined Global’s interview request Tuesday. When asked directly if Hussen had any personal relationship with anyone at Munch More Media, the minister’s office did not address the question — only saying that Hussen followed House of Commons rules in awarding the contracts.

After Global News approached them again on Thursday with additional questions about Tia Tariq, Hussen’s office admitted to the familial connection between his director of policy and the firm handling his constituency communications.

“The minister has no relationship to Hiba, other than the fact that they have this contract with the communications firm,” Hendrych said.

MPs are allowed to use publicly-funded constituency money on communications work, although Hussen was one of just three cabinet ministers who had spent significant amounts on public relations in recent months.

All federal public office holders, however, are required to avoid conflicts of interest.

When initially asked if she had a personal relationship with Hussen prior to the contracts, Hiba Tariq responded that she did not. After follow-up questions, she confirmed that she knew Hussen’s former director of policy, Abdikhier Ahmed.

Ahmed confirmed he’s the co-director of “Empire of Goodness,” a non-profit organization, with Hiba Tariq.

A Liberal source told Global before the initial story was published that Hussen was unaware of the link between Hiba Tariq and Ahmed. However, Hussen’s office — over multiple conversations this week — did not acknowledge any connection between the director of Munch More Media and one of his most senior advisers.

Speaking to reporters in Ottawa on Thursday, before the latest revelations about the connection between Hussen’s office and Munch More Media, NDP Leader Jagmeet Singh called details in the initial story “obviously problematic.”

“There’s a smell test, and if something smells bad, I shouldn’t do it. Sending money to close friends without a clear process in place obviously doesn’t pass the smell test,” Singh said.

“What we see in this case, and like we’ve seen in cases recently with other ministers, is that (the Liberals) always seem to find a way to give these contracts to people they’re friends with, or people who their friends are friends with,” said Conservative ethics critic Michael Barrett in an interview with Global Thursday.

In December, Trade Minister Mary Ng apologized for breaking ethics rules in relation to $17,000 in contracts awarded to the firm of her friend, Liberal commentator Amanda Alvaro.

“There is simply no excuse for contracting with a friend’s company,” said Ethics Commissioner Mario Dion said in a statement at the time.

In 2020, then-Toronto MP Yasmin Ratansi resigned from the Liberal caucus after it came to light that she had hired her sister to work in her constituency office.

At the time, Prime Minister Justin Trudeau said he was “deeply disappointed” by the revelations, describing them as “unacceptable.”

Ratansi described her decision to hire her sister as “an error in judgment.”

The federal ethics commissioner eventually determined that Ratansi had contravened the Conflict of Interest Code for Members of the House of Commons, but did not impose any sanction.