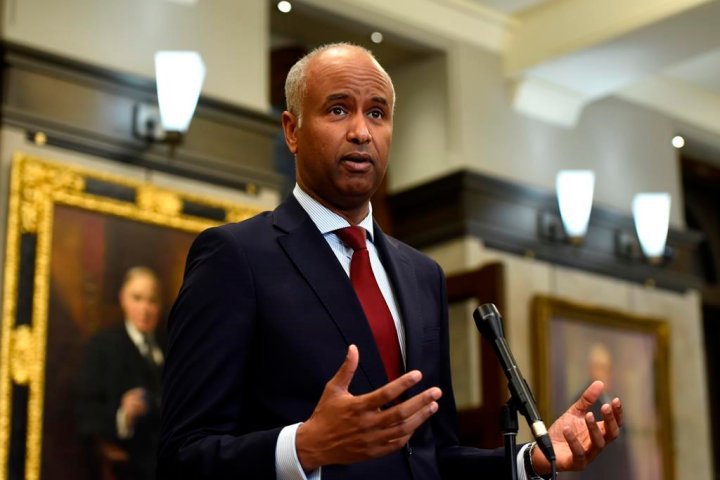 Housing Minister Ahmed Hussen says his constituency office “followed all the rules” when it hired a firm with family ties to a staffer working in his office.

“Members of Parliament are allowed and permitted to pay for services, including communications services,” Hussen said, speaking to Global News outside the federal government’s cabinet retreat in Hamilton on Tuesday.

“We followed all the rules of the financial management office of the House of Commons, as well as checking with the Office of the Ethics and Conflict of Interest Commissioner and all the services have been publicly disclosed.”

Global News reported Thursday that Hussen’s office awarded $93,050 in communications contracts to Munch More Media, a Toronto-based firm focused on the food and restaurant industry. The taxpayer funds came from his constituency office budget, not his ministerial budget.

The director of the company, Hiba Tariq, is sister to Hussen’s director of policy and close adviser, Tia Tariq.

Global News asked the ethics commissioner’s office whether it did in fact sign off on the decision by Minister Hussen’s office to award contracts to Munch More Media and whether the commissioner was aware of the familial connection between Tia and Hiba Tariq.

A spokesperson for the office said it could not answer questions from Global News, explaining that any advice that it provides is confidential, as are any requests for advice received by the office

On Friday, Global News reported that Marci Ien, now the minister of women and gender equality, also gave $10,000 in contracts from her constituency budget to Munch More Media in 2021.

Ien was not a minister at the time. The lobby registry listed Tia Tariq as a director of policy for Ien’s office at the time but Ien’s office said in a statement to Global News that is incorrect and she was not working for Ien.

“I know the Minister has spoken to this and will continue to answer questions on this. My preoccupation is that the rules always be followed, but also that Members of Parliament continue to put a priority on connecting, communicating with Canadians,” Prime Minister Justin Trudeau said in a press conference on Monday in Hamilton.

“It’s the responsibility of of any member of Parliament to make sure that they are communicating and connecting with their citizens, and we expect that to be done.”

MPs are permitted to spend constituency funds — which ultimately come from the taxpayer — on outside communications work. But a Global News analysis of cabinet ministers’ constituency spending shows that Hussen is just one of three ministers who spent a significant amount of public money on outside public relations help in recent months.

Munch More Media Inc. is a Toronto-based public relations firm specializing in promoting the restaurant and food services industry. It is not clear, outside of what Global News reported last week, that it has any experience in political communications.