How to get messaging right on masks, vaccines as ‘triple threat’ of viruses swirl 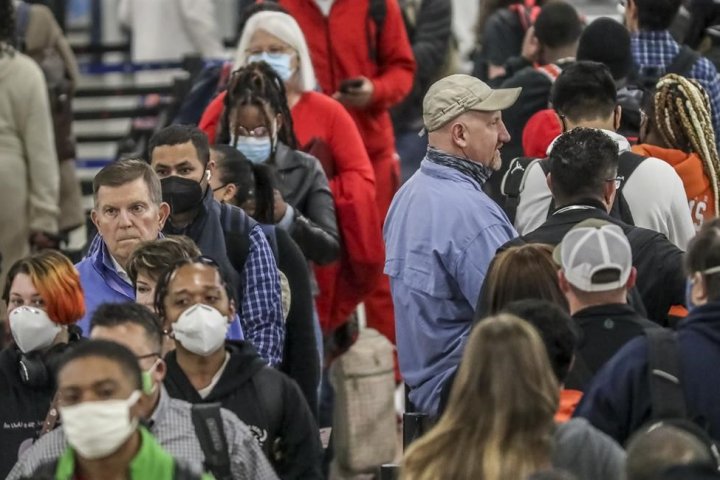 Public health officials looking to get buy-in among Canadians for health measures like masking and vaccination should use more positive, targeted and personal appeals — and they should follow their own advice, bioethicists and infectious diseases experts say.

Lessons can also be learned from the success that Canada has seen in decreasing the number of monkeypox cases in the country over the last six months, some experts added, noting that a lack of “shame-based” messaging and partnerships struck with key communities in response to that outbreak meant public health measures on monkeypox were widely followed – which helped to decrease the virus as a public health threat.

A surge in respiratory infections including COVID-19, influenza and RSV, particularly among young children and adolescents across Canada in recent weeks, has sparked significant public debate about whether mask mandates and other public health restrictions should be reinstated.

Earlier this week, the Pan American Health Organization said all of the Americas, including Canada, are experiencing a “triple threat” of respiratory illnesses that should have all countries on “alert.”

The steep rise in cases of influenza and respiratory syncytial virus (RSV) while COVID-19 continues to spread is causing significant strain on hospitals across Canada, especially pediatric emergency departments, some of which have been forced to cancel non-urgent surgeries.

This has led a number of ER physicians and hospital officials to call for mask mandates, especially in schools, to help stop the spread of these illnesses and ease the burden on health systems.

But while a number of provincial chief medical health officers say they “strongly encourage” masking indoors, none have taken the additional step of reinstating mandates, which has led to some public backlash, particularly among burned out health workers and worried parents of sick children.

Dr. Zain Chagla, an infectious diseases specialist at St. Joseph’s Healthcare Hamilton, Ont., took to social media earlier this week to say he has seen a noticeable rise in “shame-based messaging” amid the spike in respiratory viruses, which he does not believe is helpful.

“I can say this will not get engagement and will push people further,” Chagla said in a tweet on Nov. 16.

He pointed to the significant drop in monkeypox cases in Canada, noting that while the monkeypox vaccine was a valuable tool in tackling the outbreak that began in May, there was also “clear messaging,” “positive engagement” and “non shame-based strategies” employed in that response.

He co-authored an opinion piece in the peer-reviewed medical journal BMC Infectious Diseases in July 2021 that stressed “scolding and moral outrage are counterproductive” when it came to the COVID-19 response, and that this behaviour can perpetuate stigma.

“Casting shame and blame on people violating public health measures should be avoided,” the article said.

Taking this approach to get more Canadians to adopt measures like masking now that hospitals are swamped with three simultaneous virus outbreaks runs the risk of tuning people out, Bogoch told Global News Thursday.

“It can be very divisive and polarizing,” he said. “Smart approaches are where you enable people to make smart decisions for themselves, and you can do that through a variety of mechanisms.”

These include fact-based, pragmatic communications strategies that are targeted to specific audiences, he said.

With a population of 38 million that includes a multitude of languages, cultures, ages and backgrounds, a one-size-fits-all communications strategy isn’t always effective, Bogoch said.

This was a key part of the monkeypox response and proved to be powerful tool in ensuring the people most affected by the virus in Canada – men who have sex with men – would be appropriately engaged by people they trust, Bogoch said.

“There was a rapid acknowledgment that this was going to be an issue and a rapid response to that, including access to vaccinations, targeted communication strategies, meaningful community outreach, fantastic community leadership – and look what happened. We had a pretty rapid rise in cases and then they just plummeted.”

Maxwell Smith, a bioethicist and assistant professor in the faculty of science at Western University, says using shame or morality in messaging to encourage behaviours like masking can work, but it can also come with unintended consequences, including entrenching certain opposing views that might be counterproductive.

Smith says it’s not uncommon in public health or policy to use morality to encourage certain behaviours. He pointed to dentists’ advice on teeth-brushing: brushing regularly, like masking, is a personal choice, but public health officials never frame it that way, Smith said.

“No one is required to brush their teeth, and yet we can still very strongly say this is something you really ought to do,” he said.

But the most effective way to get public buy-in for measures that may be unpopular or uncomfortable is to make the message hit as close to home as possible, Smith said.

Lorian Hardcastle, a health and law professor at the University of Calgary, agreed, saying the most effective messaging to encourage behaviours are those that help people understand the concerns at play and what could happen if they ignore the advice.

Demonstrating the personal impacts of a lack of masking can be powerful tools of persuasion, she said.

“If you or your family have immunocompromised conditions, you are particularly at risk. I think that kind of messaging seems to me to be the most effective because it raises legitimate concerns for people and makes them appreciate why it might be risky to them if they don’t mask.”

Hardcastle, Smith and Bogoch all said they also believe political leaders and public health officials should lead by example and wear masks themselves, if they want the public to follow suit.

On Friday, video surfaced of Ontario’s top doctor, Keiran Moore, maskless at a party in Toronto just days after urging all Ontarians to mask indoors.

This caused heavy backlash, especially among those on the front lines of what is being called a “crisis” in emergency departments across Canada.

“How is this supposed to make the parents of sick children and burnt out healthcare workers feel as the number of PICU (pediatric intensive care unit) patients continues to exceed PICU capacity?” Dr. Michael Warner, an intensive care physician in Toronto, said in a tweet.

Smith says he experienced a similar situation of contrasting advice on an airplane, when a flight attendant told passengers the airline strongly recommends wearing masks – a message she delivered maskless.

“Usually when we have language like that, absolutely leaders and employers of workplaces feel compelled to do these things, and yet with masks, we’ve seen a bit of an anomaly where people just get away with not doing it,” he said.

Leaders that model behaviours like masking and vaccination can help to depoliticize these measures and get more wide public adoption, Bogoch said.