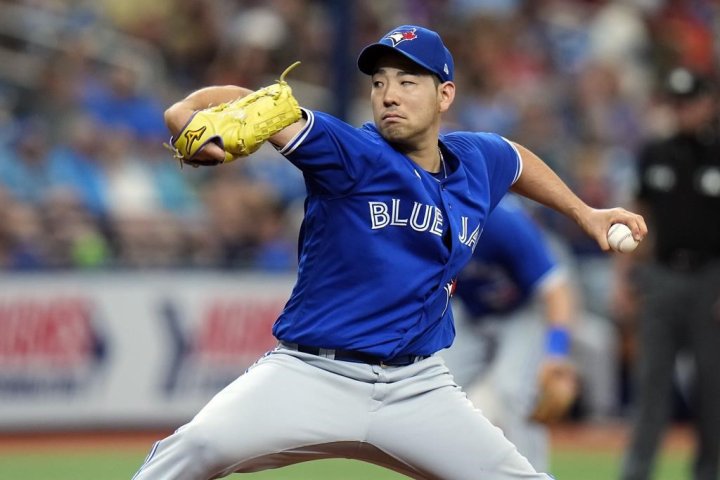 ST. PETERSBURG, Fla. (AP) — Hits by newly acquired Jose Siri and David Peralta produced the winning run for the Tampa Bay Rays in a 3-2 victory over the Toronto Blue Jays on Wednesday.

Siri led off the Tampa Bay sixth with a single off Adam Cimber (8-4). He stole second, moved to third on a groundout and scored on Peralta’s tiebreaking single.

Peralta had two of Tampa Bay’s six hits, all singles, after they managed just two hits in Tuesday night’s 3-1 loss.

Peralta was acquired in a trade with Arizona on Saturday, and Siri came over from Houston in a three-way trade on Monday.

“I had a lot of pressure,” Peralta said after driving in his first run for the Rays. “I got here Sunday. We lost. Yesterday we lost and I’m like, ‘Come on. You’ve got to do something.’ We needed to start winning.

“But I was trying not to do too much. I knew it was going to happen, but it happened today.”

Ryan Thompson (3-2) got the win after pitching two hitless innings. Jason Adam worked the ninth for his fifth save in six attempts.

Teoscar Hernández drove in Toronto’s runs with a first-inning double and his 15th homer in the fourth.

Yusei Kikuchi allowed two runs and three hits in four innings, striking out five. He threw 74 pitches in his second start after a three-week layoff due to a neck strain.

“Overall I felt good,” Kikuchi said through a translator. “All three pitches were working so I feel like I’m going to keep getting better and better.”

Rays opener Jalen Beeks pitched one inning and Ryan Yarbrough followed with four innings, giving up Hernández’s homer as his only hit. It was Hernández’s sixth career homer off Yarbrough.

Vladimir Guerrero Jr.’s eighth-inning single was Toronto’s only hit in four innings against Thompson, Pete Fairbanks and Adam. The Blue Jays got only four men on base after the first inning and one was doubled up on a line drive.

“(Toronto has) arguably one of the best lineups in the league so anytime you can shut them down like that, that’s a big win for us,” Adam said. “Hopefully we can use some of that momentum and roll it into a nice little streak here.”

“You want to end a homestand on a good note, especially against someone we’re chasing right now in the wild-card standings,” Yarbrough said. “So everyone’s in a good spot right now, and we’ve got a couple of new additions on the team.”

Whit Merrifield, a two-time All-Star second baseman who was acquired by Toronto in a trade with Kansas City on Tuesday, has a week to decide whether to get vaccinated so he can play in Canada.

Merrifield was one of 10 unvaccinated Royals who could not play in the July 14-17 series in Toronto because of Canadian travel restrictions.

“Obviously we knew he wasn’t there (with the Royals) in Toronto, but it’s a personal choice for him,” interim Toronto manager John Schneider said. “I’m sure he’s had conversations with his family and other people. So we’re looking forward to having him tomorrow in Minnesota.”

The Blue Jays will play in Minnesota this weekend and in Baltimore next week before returning to Toronto on Aug. 12 to open a six-game homestand.

Blue Jays: RHP Ross Stripling was placed on the 15-day IL with a right glut strain. … OF George Springer missed the fourth of five games with a sore right elbow, but he has resumed baseball activities.

Rays: RHP Matt Wisler (neck strain) is almost ready to pitch a rehab inning before being activated. … OF Harold Ramirez, out since July 18, is due for another X-ray on his fractured right thumb.