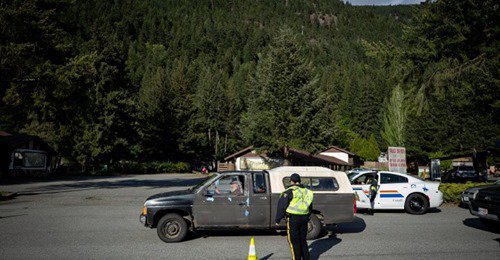 British Columbia RCMP have turned back more than 100 vehicles at checkpoints enforcing COVID-19 restrictions against non-essential travel, and fined at least two people.

B.C. RCMP Southeast District spokesperson Cpl. Jesse O’Donaghey said as of Saturday evening, 3,799 vehicles had passed through road checks on four key highways linking the Lower Mainland to the rest of B.C., while 103 were turned back.

Police were stopping vehicles on Highway 99 near Lillooet, Highway 3 in Manning Park, Highway 5 at the old toll booths and Highway 1 near Boston Bar on Friday.

Officers were back at all of the locations except Boston Bar on Saturday.

“Two drivers were charged for allegedly failing to stop for police contrary to section 4 (1) pf the EPA – Travel Restrictions Order No. 2, which carries a $230 fine,” O’Donaghey said in an email.

B.C.’s restrictions on non-essential travel split the province into three zones: the Lower Mainland, Vancouver Island, the Interior and North.

The restrictions are set to expire at midnight Tuesday morning, and health officials have been pleading with British Columbians to adhere to them over the Victoria Day long weekend.globalnews