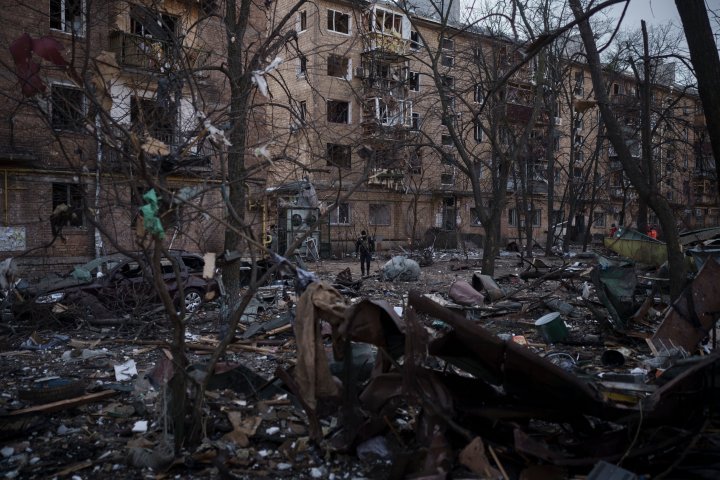 After three weeks of intense fighting, talks between Russia and Ukraine are exploring the prospect of possible “neutrality” for Ukraine, which experts say is a misunderstood term by many meant to make Ukraine more vulnerable.

“What we have to be very careful with, is that the terminology that we have in the west does not necessarily mean the same thing in the case of other countries or other cultures,” said Aurel Braun, a professor of international relations and political science at the University of Toronto and an associate of the Davis Center at Harvard University.

Braun explained that Russia is asking for a “neutered” Ukraine, “a helpless, hopeless Ukraine that would be vulnerable to a rapid and complete takeover by Russia.”

Ukrainian President Volodymyr Zelenskyy acknowledged this week in the most explicit terms yet that Ukraine is unlikely to realize its goal of joining the Atlantic alliance. It brought a glimmer of hope as a possible way out of the bloody crisis in Ukraine.

Zelenskyy told European leaders gathered in London on March 15 that he realizes NATO has no intention of accepting Ukraine.

“We have heard for many years about the open doors, but we also heard that we can’t enter those doors,” he said. “This is the truth, and we have simply to accept it as it is.”

Braun said Zelenskyy’s remarks show that he may be willing to give up his dream of joining NATO “and say that Ukraine would be neutral.”

“But that is a self-declared status. If you are a self-declared neutral state, then you could be neutral today. You could change your mind tomorrow. And that is obviously not what the Russians are going to accept,” Braun added.

An official in Zelenskyy’s office said the talks this week focussed on whether Russian troops would remain in the separatist regions in eastern Ukraine after the war and where borders would be. Ukraine wants at least one Western nuclear power involved in the talks, and a legally binding document with security guarantees.

In exchange, Ukraine was ready to discuss a neutral military status, the official told The Associated Press on condition of anonymity.

Russian Foreign Minister Sergey Lavrov and Vladimir Medinsky, the chief Russian negotiator, first mentioned on March 16 that “neutral” status for Ukraine was on the table, sparking a guessing-game about what that might mean.

Neutrality is about not picking sides, keeping out of binding alliances, and trying to stay out of conflict. However, even neutral nations have their limits. European countries often mentioned when neutrality comes up are Switzerland — which like Austria has codified neutrality into its constitution — as well as Sweden, Finland, Ireland and, once upon a time, Belgium, which is today the home of NATO.

Switzerland has generally resonated as the leading national symbol of neutrality.

However, the Swiss lined up with European Union sanctions against Russia after the invasion of Ukraine.

A professor of political science at McGill University, Maria Popova, says Ukraine’s status right now is “de facto neutral” and since it is not a member of NATO.

“Actually, the NATO question and the question of Ukrainian neutrality is somewhat of a red herring in this entire discussion in the sense that Russia kept repeating that they want to make sure that Ukraine doesn’t become part of NATO, but it wasn’t entering, in it or about to enter it,” she said.

Popova explained that NATO has a policy that disallows countries with a territorial dispute or unsettled borders from joining. Ukraine is in that category because Russia annexed Crimea and has occupied parts of its territory since 2014.

However, Ukraine is still a member of the United Nations and an independent and sovereign state, says Braun.

“There are no restrictions on its sovereignty and it has been under attack by Russia…and Putin has refused to recognize the rights of Ukraine. He said there’s no such thing as Ukraine, and there are no such people as Ukrainians,” Braun said.

While the Russian president has long rejected the statehood and independence of Ukraine, he justified the invasion by focusing on the perceived threat he believes a Western-oriented Ukraine, and NATO in particular, pose to Russia.

“We cannot stay idle and passively observe these developments. This would be an absolutely irresponsible thing to do for us,” Putin said on Feb. 24.

“For our country, it is a matter of life and death, a matter of our historical future as a nation. … It is not only a very real threat to our interests but to the very existence of our state and to its sovereignty. It is the red line which we have spoken about on numerous occasions. They have crossed it,” Putin said.

She explains that in reality, the last NATO expansion happened 15 years ago, and when it happened Russia did not react with any serious level of hostility.

Braun says when it comes to Ukraine, even if a deal ends up being struck with Russia and Ukraine gets a neutral military status that won’t be enough for Russia.

“The problem is that Vladimir Putin is saying, I want a de-Nazification of the government. And what does that mean? It means that I want this government of Zelenskyy gone because it’s a Nazi government so you can’t have it in power,” he said.

“In other words, we want you to be helpless and hopeless and if we, Russia, then decide to violate the agreement of neutrality, we could just move troops in and we could be in Kyiv in 24 hours or less,” explained Braun.

“They want to neuter Ukraine…Russia wants to make it hopeless and unable to defend itself, dependent on the goodwill of the international community,” he said.

Popova says all this talk of neutrality is being used to achieve some sort of ceasefire because Russia is not doing well in this war and is not achieving its goals.

According to Popova, “The main reason for Russia to propose this ‘neutral’ status” could be to get “some sort of cease-fire in place in order to regroup and launch another attack.”

“And I think that’s what the Ukrainians are afraid of,” she said.

Also, given that Ukraine has been invaded twice in eight years by Russia, Popova says it would be very difficult to sell neutral status to the Ukrainian public.

“Because what does that mean? They’re going to get overrun immediately…this sort of says that they’re not going to cooperate with any military alliances…it sounds like it would greatly diminish Ukraine’s ability to survive as a state,” she said.

Both Popova and Braun said that Russia has no credibility right now to give guarantees and that Ukrainian neutrality wouldn’t necessarily end the war. It will only make Ukraine more vulnerable to be overrun by Russia.

“Russia has no credibility…because they did not participate in the diplomacy in good faith. They kept saying till the last moment that they have absolutely no plans to invade,” said Popova.

However, she believes that the west can offer some kind of guarantee by coming up with an “inventive way” to signal to Russia that Ukraine is now part of the European Union.

“Maybe not as a member, but some sort of road map for membership that would signal that if, after this status, Russia again threatens Ukraine, it would be threatening the entire European Union in a more meaningful way,” Popova said.

She says this is the only way to potentially create regional military cooperation between members of NATO and Ukraine that in some way guarantees Ukraine’s security.

In the meantime, Braun says Ukraine has no choice but to negotiate because they need to indicate flexibility.

“They need to hold out hope that there may be some negotiated solution. But everything the Russians have said so far has been false,” said Braun.

He also said ultimately there’s only one person in Russia who makes the decisions and that’s Vladimir Putin.

— With files from The Associated Press