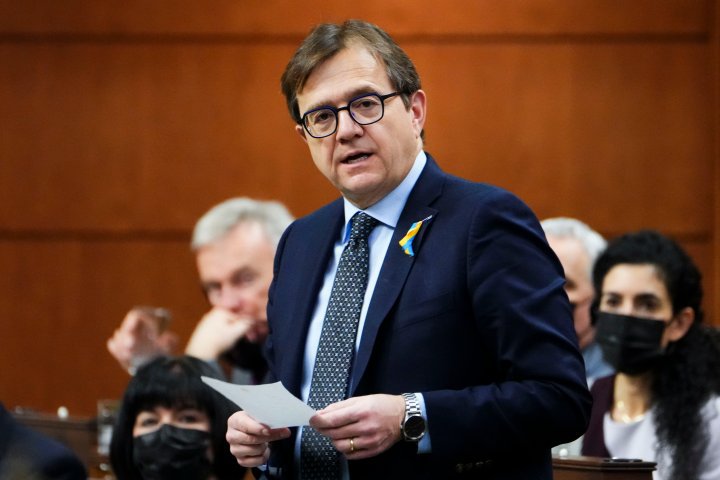 Canada has capacity to increase oil and gas exports by up to 300,000 barrels per day (bpd) in 2022 to help improve global energy security following Russia’s invasion of Ukraine, Natural Resources Minister Jonathan Wilkinson said in a statement on Thursday.

Canada is also looking at ways Canada could displace Russian gas with liquified natural gas (LNG) from Canada after requests from European countries, the minister added.

Wilkinson was in Paris for a meeting at the International Energy Agency (IEA) headquarters, where the United States and allies discussed ways to help calm volatile oil markets.

Canada, the world’s fourth-largest crude producer, is keen to help shore up long-term energy security as countries that previously relied on Russian oil and gas look for replacements amid sanctions aimed at punishing Russia.

Wilkinson said Canada could increase oil exports by up to 200,000 bpd and natural gas exports by up to 100,000 barrels of oil equivalent per day (boepd) this year in response to requests from allies to address supply shortages.

“Our European friends and allies need Canada and others to step up,” Wilkinson said. “They’re telling us they need our help in getting off Russian oil and gas in the short term, while speeding up the energy transition across the continent.”

Canada currently exports around 4 million bpd of oil to the United States, a small portion of which is re-exported overseas.

The announcement comes less than a week before Canada releases a detailed plan on how it will cut carbon emissions. Environmental activists urged the government to focus on replacing Russian energy with cleaner sources.

“The only real solution to oil-fueled aggression against people and the climate is to accelerate the transition off fossil fuels by investing in renewable energy and efficiency,” said Greepeace Canada’s senior energy strategist Keith Stewart.

Wilkinson said Canada is having conversations with European countries about whether it can build more LNG projects. Currently, Canada does not export any LNG, but a Shell-led consortium is building a large facility on the west coast.

Any LNG project would need to be ultra-low emissions and able to transport hydrogen in future as Europe weans itself off fossil fuels, Wilkinson said.

On the east coast there are a couple of potential projects “that are some way through the regulatory process,” Wilkinson said, without specifying which ones.

“We are looking at what we may be able to do … because, of course, they (Europe) have a very large dependence on natural gas that comes from Russia,” he said.

The minister also attended a meeting to discuss how IEA member countries can work together to ensure availability of critical minerals required for the energy transition.