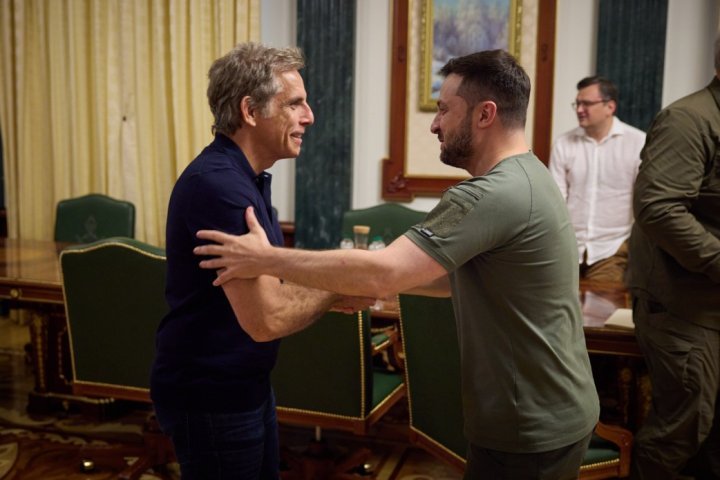 Stiller, who was visiting Ukraine as a goodwill ambassador of the United Nations High Commissioner for Refugees (UNHCR), gushed about Zelenskyy upon meeting, telling the president, “You’re amazing.”

Stiller’s visit to the country comes as the Russian invasion of Ukraine continues to force millions of people to flee the war and become displaced internationally.

The pair shook hands in introduction and Zelenskyy told the Zoolander actor that he and the other government officials in the room (including Ukrainian Foreign Minister Dmytro Kuleba) knew Stiller “very well.”

The pair briefly discussed Zelenskyy’s own acting career. Up until his landslide election win in 2019, Zelenskyy was an actor and stand-up comedian. He had even played a Ukrainian president in a popular TV series.

“You quit a great acting career for this,” Stiller mused.

“Not so great as yours,” Zelenskyy replied.

“But what you’ve done and the way you rallied the country and the world, it’s really inspiring,” Stiller continued to compliment.

Later, Stiller, Zelenskyy and several other Ukrainian officials sat down to discuss the Russian invasion and its impact on the country’s people.

“It’s not interesting to speak about the war every day,” Zelenskyy explained. “But for us, it’s very important.”

The Ukrainian president said ending the war becomes especially difficult when “people forget to speak about it.”

Russia launched its invasion of the country nearly four months ago on Feb. 24.

Zelenskyy thanked Stiller for continuing to bring new attention to the war.

“I feel it’s hard to understand what’s actually going on here if you haven’t been here,” Stiller said.

“The level of destruction … You see it on TV, you see it on social media,” said Stiller. “It’s something else to actually see it and feel it.”

The actor told Zelenskyy that he had just visited Irpin, a city close to Kyiv in northern Ukraine.

According to a press release from the president’s office, Stiller visited Irpin to speak to people who have survived the occupation.

The UNHCR also released a statement, claiming the trip to Irpin will “enable Mr. Stiller to communicate the need for continued and increased support to the humanitarian response in Ukraine.”

The UNHCR statement claimed Stiller visited Makariv as well, in order to visit families whose homes were destroyed.

“What you saw in Irpin is definitely dreadful,” Zelenskyy confirmed. “But it is even worse to just imagine what is happening in the settlements that are still under temporary occupation in the east.”

Following his meeting with Zelenskyy, Stiller tweeted about World Refugee Day. The actor wrote it was an “honour” to meet the president “to stand in solidarity with people forced to flee in Ukraine and worldwide, and bring more attention to the humanitarian situation.”

It was an honour to meet President @ZelenskyyUa on #WorldRefugeeDay as part of my visit with UNHCR @Refugees to stand in solidarity with people forced to flee in Ukraine and worldwide, and bring more attention to the humanitarian situation. @Refugees #WithRefugees pic.twitter.com/zpNpva233j

Earlier this week, Stiller also visited Poland. There, he met with refugees who were forced to flee to the neighbouring country. According to the UNHCR, Stiller met a mother and her three children who fled Kharkiv two months ago.

“Shortly after she and her children fled, her father was killed back home in Kharkiv after a bomb fell on her parent’s apartment building,” the statement claims. “The family want to return home to Ukraine but the neighbourhood where they are from has been devastated by the war.”

Stiller is not the only celebrity to visit Ukraine. In April, Angelina Jolie visited the country to meet children effected by the war. Sean Penn also visited Ukraine to make a documentary about the Russian invasion.

Since Russia’s invasion in February, more than 12 million Ukrainian residents have fled their homes, according to the United Nations. More than five million Ukrainian refugees have been recorded in Europe, while another seven million people are believed to be displaced still within the country.