B.C. wildfires: Fluid conditions prompt evacuations for some, relief for others 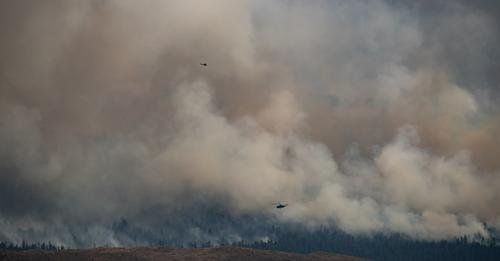 The wildfire situation in British Columbia remains fluid as nearly 300 fires are blazing, but even though drought conditions persist in the southern half of the province and fire risk is still extreme, there are some small signs of improvement.

Evacuation alerts covering the Resort Municipality of Sun Peaks and several surrounding areas north of Kamloops have been lifted as crews work to contain a nine-square kilometre blaze.

Elsewhere, an evacuation order posted earlier this week in southeastern B.C. for nearly 200 properties along the Slocan River has been downgraded to an alert for most residents, while Drive BC, an online traveller information system, says Highway 1 north of Hope has reopened - three weeks after it was cut by a wildfire that destroyed the village of Lytton.

But the BC Wildfire Service says that 156-square kilometre blaze is still aggressive on its northern flank, prompting evacuation orders for the community of Spences Bridge and surrounding First Nations.

Evacuation orders have also been expanded around the roughly 20-square kilometre Nk'Mip Creek fire in the south Okanagan and another burning at the north end of Shuswap Lake, north of Sicamous.

Emergency Management BC says more than 5,000 properties across the province are covered by evacuation orders as wildfires have scorched more than 3,600 square kilometres of bush since the start of the season on April 1.

More than 100 firefighters from Quebec arrive in B.C. Friday, while a crew of 100 from Mexico is due on the weekend and a Canadian Armed Forces Contingent is now in the north Okanagan in advance of deployment to various fires.

Ian Meier, executive director with the BC Wildfire Service, told a news conference Thursday there's no immediate relief to drought conditions in southern B.C. but cooler temperatures and precipitation in northern B.C. have allowed officials to move some firefighting resources from that region to areas in the south.ctvnews