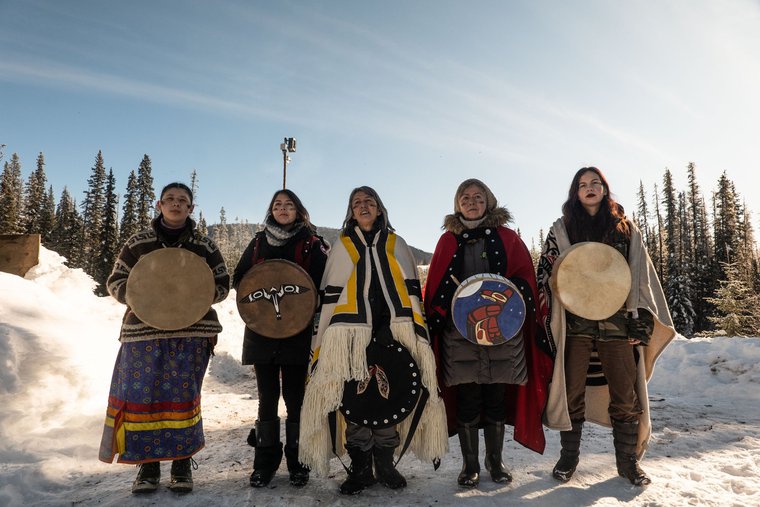 June 5, 2020 - Prince George (BC): Charges have been dropped against the 22 Wet'suwet'en land defenders and supporters arrested between February 6th and February 10th during the militarized invasion of our unceded territories.

Several others, who were arrested in a violent pre-dawn assault by the RCMP in early February, were never charged with any crime.

The BC Prosecution Service (BCPS) did not recommend that the Court pursue criminal contempt charges, citing “public interest factors” including that no further breaches of the injunction have occurred, that those who were arrested were non-violent, and that discussions between government representatives and our Dini’ze and Tsake’ze (Hereditary Chiefs) have occurred. The BCPS has stated that further criminal charges could be made under the criminal code if new evidence emerges.

While we are relieved that charges have been dropped, we know that the arrests and removal of our hereditary chiefs, Wet’suwet’en people, and our invited guests from our unceded lands was unlawful, immoral, and a violation of our most basic human rights.

We acknowledge that many still face charges for courageously standing in solidarity with the Wet’suwet’en, and that this fight is far from over. We are forever grateful for the solidarity and support from our relatives and allies.

Coastal Gaslink continues to trespass on our lands under the escort of the RCMP, who maintain an illegal remote police detachment on Wet’suwet’en territory. We are treated as criminals on our own land.

"We have a right to ceremony. We have a right to do what we want on our own lands. Protecting my territory is not criminal. Industry and government is criminal for breaking all the environmental laws. They're the ones that should be charged," stated Freda Huson, Chief Howilhkat of Unist'ot'en