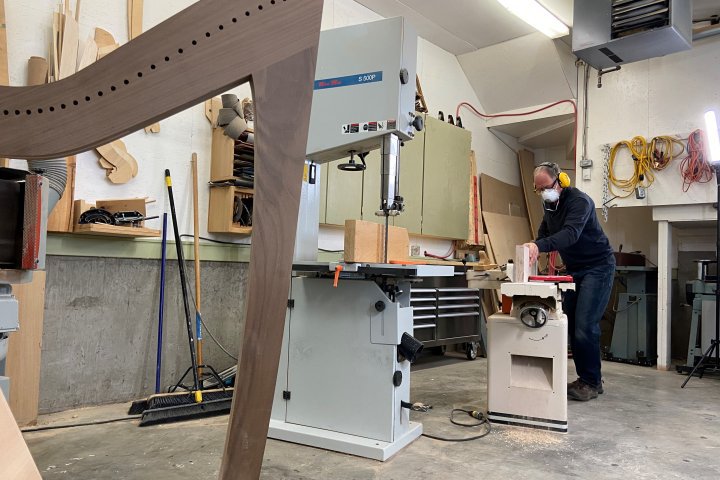 It takes an incredible amount of precision in this artisan craft, and Jamie Newsom, who makes classical instruments from raw material has the gift.

“Things are measured in millimeters and it takes patience and sharp tools,” Newsom said.

He has been building these works of art for nearly a decade-and-a-half out of his garage in Bragg Creek, Alta.

“You start with a piece of wood and it will become a sound board and it’s hard to imagine how to get an instrument out of it, but you log the hours in the shop making sawdust and you get there,” Newsom said.

It started from a career in engineering and his own musical talents and experience with string instruments. He eventually turned his woodworking hobby into a one of a kind job.

But it was born out of necessity. Instead of renting his daughter a harp, he made one.

“We took my daughter to a woman named Joanne Meis — she had been doing it for years and she learned how to build harps from her father. I said: ‘Maybe I will build a harp’.”  Her eyes rolled over because she heard this from every dad who walked in to rent a harp for their child.”

“A year later I started to build that first harp and Joanne spent time with me to analyze it and that’s how it started.”

His daughter, Emilie Delorme-Newsom is now 30-years-old and has a collection of her dad’s harps.

“They are very lively, every note is like a crystal bell,” Delorme-Newsom said. “Other harps I noticed I have to work harder, they don’t speak as much.”

The connection she has to a creations built from her father’s own hands, makes music magic.

But Newsom doesn’t make them only for his daughter — he has been selling them across Western Canada and from as far away as Israel.

Most of his customers aren’t professionals — they’re amateurs.

“The main part of the clientele is middle aged gals. They’ve got kids out of the house and the husband has a new Harley and they think, I need something,” Newsom said. “They are like kids, so enthusiastic and they take them away and they love them and that makes me feel good.”

Each harp takes about a month to make and Newsome sells them for $7,000 each.

“I make two at a time and I call them twins. They are made out of the same boards. You expect it to be similar but they are like children — they don’t come out the same,” Newsom said. “Everything is the same look, I made it identical but they don’t act the same at all.

“It takes time to hear their character and that’s the best part for me.”