2020 stretched the social fabric of the United Kingdom. 2021 could rip it to pieces 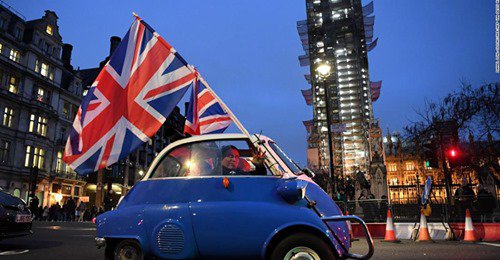 On January 2, 2020, UK Prime Minister Boris Johnson tweeted that the following 12 months would amount to a "fantastic year for Britain." Instead, a global pandemic and the political turmoil of Brexit have stretched the social fabric of the United Kingdom to ripping point.

The politics and constitutional arrangements between the four nations that make up the United Kingdom are a constant source of pain to any leader trying to reconcile their substantively different political and societal priorities.
But the two biggest peacetime crises faced by Britain -- one anticipated, and one that came out of thin air -- have combined to create a perfect storm of dissatisfaction with the status quo.
Finally, after years of drawn-out political debate and tortuous negotiations, Britain left the EU's regulatory and trading universe on January 1, but with a myriad of unpredictable strains on the UK's political union that could lead the British Prime Minister into choppy constitutional waters. Simultaneously, the Covid-19 pandemic has laid bare how much political distance there is between the devolved governments -- in Edinburgh, Cardiff and Belfast -- and London.

The independence movement in Scotland has grown since the country's referendum in 2014, where Scots voted by 55% to remain in the Union. According to a recent poll in the Scotsman newspaper, independence is currently 16 points ahead.
Much of that support is attributed to Scotland's objection to Brexit. Even as Johnson celebrated securing a trade deal with the EU, Scotland's First Minister Nicola Sturgeon tweeted that "there is no deal that will ever make up for what Brexit takes away from us. It's time to chart our own future as an independent, European nation."
In Northern Ireland, nationalist politicians that spoke to CNN admitted they have never been so confident that, should a vote be called, the north could be reunited with the Republic of Ireland.
While there is not a strong independence movement in Wales, the support for business-as-usual has become untenable, as nationalists become increasingly hostile towards the Conservative government in Westminster.
And in England, the largest, richest and most conservative of the four, resentment of a status quo that can easily be characterized as London sending money to fund its poorer relatives in the other three nations is growing.
All of which presents a problem for Boris Johnson, who is not only leader of the Conservative and Unionist Party, but also the self-appointed Minister for the Union. Indeed, ever since he took office, Johnson has painted himself as a defender of the Union and talked at length about strengthening ties between the four nations.
But Unionists within his own party are skeptical as to how much the PM really cares about three countries where a majority of the electorate don't vote Conservative, and where his personal popularity ratings are poor.
Worse for Johnson, 2021 is a battlefield of trip wires and landmines that he's about to wade onto with -- his Unionist allies fear -- the parlous tread of a hyperactive elephant. 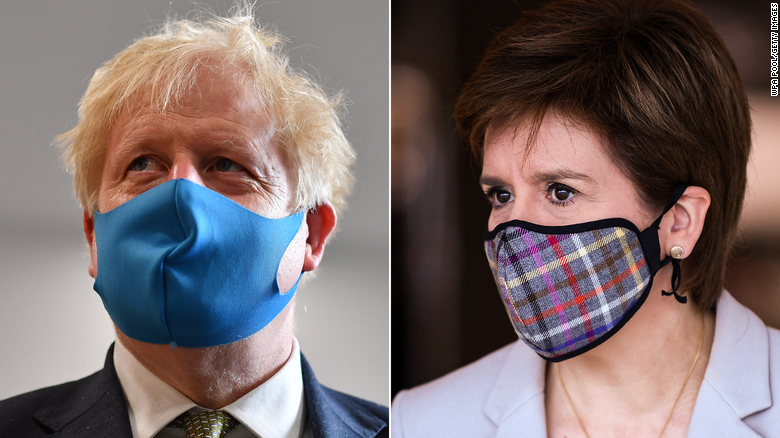 Boris Johnson and Scottish First Minister, Nicola Sturgeon
The most dangerous of these landmines is May's Scottish parliamentary election.
The Scottish National Party has dominated the nation's politics since the independence vote in 2014. Though they lost the poll, by 45% to 55%, the SNP went on to win 56 of Scotland's 59 Westminster seats in 2015.
Barely a year later, they were handed another propaganda victory, when 62% of Scottish voters backed remaining in the EU against the 52% across the UK that voted to leave. Ever since, the message that Scotland is being dragged out of Europe against its will has been powerful.
"The support for independence has definitely been boosted by Brexit," says Nicola McEwan, professor of territorial politics at the University of Edinburgh. "You can expect that sentiment to grow if the Conservatives' Brexit policy leads to food shortages, an economic crash and a dwindling of the UK's status in the world."
Scotland's First Minister, Nicola Sturgeon, has also been praised by many Scots for her handling of the pandemic, even though her policies and their efficacy have seldom differed dramatically from Johnson's.
McEwan thinks that this is mostly down to the fact that Sturgeon "has fronted her government's response, giving a press conference nearly every day, whereas Boris Johnson has not been as visible."
It's not hard to see why the SNP's platform -- leaving the UK and re-joining the EU under the leadership of Sturgeon -- is so appealing to many north of the border. And Conservatives in England are seriously worried that Johnson doesn't have either the energy or passion needed to combat it.
"There is genuine fear that Scotland could go under this government and that there is no energy going into addressing that," says one MP on the government's payroll. "We've struggled to make an emotional case for the Union. Partly that's because our focus is on our heartlands in England, but we are going to need to make a positive case beyond the economic benefits to Scotland."
If the SNP does win May's elections with independence at the core of its campaign, Johnson has two options: Carry on ignoring calls for a referendum, or try and fight the SNP. Neither option is attractive, since the only effective way to counter the SNP is to fight on their terms. 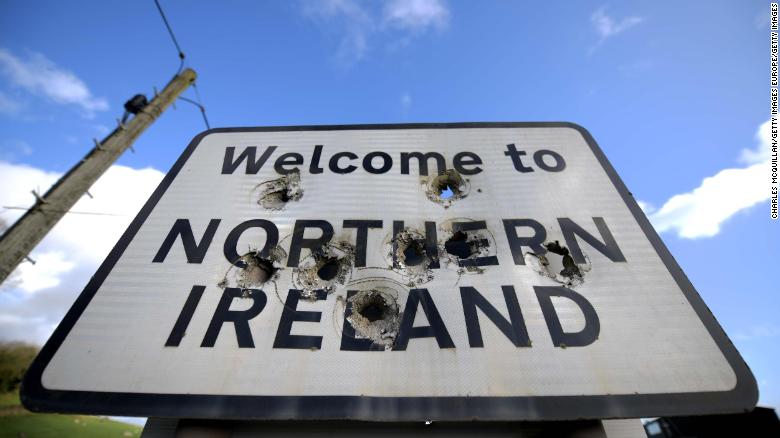 A Welcome to Northern Ireland sign is marked with bullet holes on February 17, 2019 in Ballyconnell, Ireland.

"We need to make the case that Scotland's ability to govern differently only works because of the overarching economic structure of the UK," says Eddie Barnes, former director of communications for the Scottish Conservatives. "We need to end the perception that devolution is a slow drift from the Union."

Equally fraught, if less immediate a threat, is the rise in confidence among Northern Irish Republicans. Northern Ireland has long been the most likely casualty of Brexit.

The province, which is part of the UK, shares a land border with the Republic of Ireland, which is in the European Union.

The prospect of a customs border separating the two has raised all sorts of concerns, ranging from the flow of goods to a return of the sectarian violence of the 1970s and 80s.

In order to prevent that border, the UK government agreed with the EU to something called the Northern Ireland Protocol, which, Unionists in Northern Ireland fear, ties them to follow the EU's customs and regulatory rules rather than the UK's.

"In practical terms, it has put Northern Ireland in a different position to the rest of the UK. So, the more now Britain shifts from the EU, the more in common Northern Ireland has with the EU, and thus the Republic of Ireland," says Katy Hayward, professor of political sociology at Queen's University Belfast.

The issue of the north becoming closer to the Republic has put a spring in the step of those who dream of reunification.

"Soft-nationalists who were pro-European -- and even some soft-Unionists -- have been forced to seriously rethink what Northern Ireland is and should be," says Matthew O'Toole, a Northern Irish lawmaker for the pro-reunification Social Democratic and Labour Party.

"People who identified as Irish had made their peace with Northern Ireland's status, in part thanks to the Good Friday Agreement," he explains. "Brexit has dragged up issues that had felt settled here and put them to the top of our agenda."

The pandemic has also highlighted the political differences in the governance of Northern Ireland. The country has a power-sharing arrangement to ensure that Unionists and Republicans have an equal say in how things are run. Naturally, some have preferred that Northern Ireland follows the measures in the Republic, while others wanted to remain in lockstep with Britain.

"We've had unhappy compromise after unhappy compromise, which probably summarises the politics of Northern Ireland," says Hayward. "No one has got exactly what they want. It's exacerbated tensions that were always there and it's unlikely to stop being so fraught in 2021."

2021 was supposed to be the year in which Northern Ireland celebrated its centenary. Instead, its citizens are likely to be more divided than they have been for years. 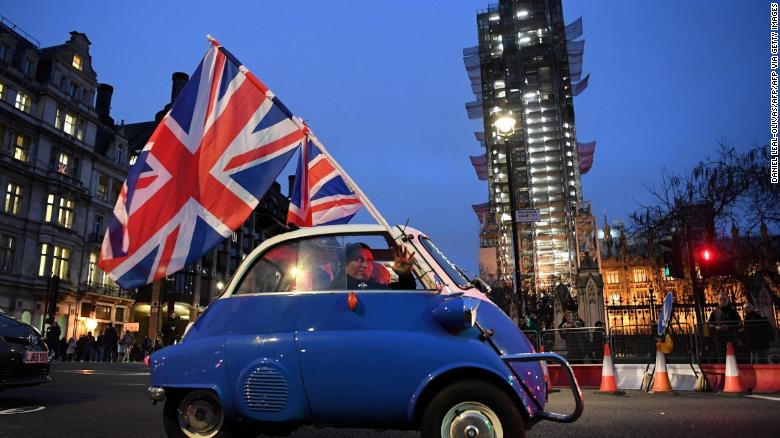 A man waves Union flags from a small car as he drives past Brexit supporters gathering in Parliament Square, near the Houses of Parliament in central London on January 31, 2020 on the day that the UK formally leaves the European Union.
Mercifully for Johnson, the situation is less perilous in Wales, where there isn't a serious separatist movement. However, since Johnson faces the prospect of fighting in Scotland and Northern Ireland, he risks overlooking Wales.
"Covid has highlighted what devolution actually means, in terms of Welsh politicians being able to make independent policy that directly affects Welsh people," says Roger Awan-Scully, professor of politics at Cardiff University.
One error Johnson could make is that, in order to appeal to his base in England, he goes on the offensive against political leaders who are anti-Conservative -- meaning Wales's hostile Labour leadership could be a target.
"If Conservatives take a more aggressive line against devolution and pro-centralised control from London, it risks emboldening the anti-Westminster movement in Wales," Awan-Scully adds.
The final piece in this puzzle, of course, is Johnson's base in England.
The Conservatives won a majority in 2019 by taking a string of Brexit-supporting Labour seats in the north of England. The party's heartlands in the south also voted heavily in favor of Brexit.

"When we eventually leave the EU proper, this government will need a new enemy, and the obvious choice is Scotland and to a lesser extent Wales," says Rob Ford, professor of politics at the University of Manchester. "Many English Conservatives don't really care about the Union. They see the other countries as annoyances that are bankrolled by England."
2021 is going to be a difficult year for all four nations of the UK.
And the Prime Minister, who likes to wrap himself in the Union flag, might be tempted to keep his head down and ignore the separatist screams.
But if Johnson is unable to make leaving the EU look like a success and he alienates the public in Scotland, Northern Ireland and Wales, it's inevitable that more and more voters will wonder if the grass is greener outside of the United Kingdom.cnn