‘Your guy has really screwed the pooch’: Kenney told feds over Coutts blockade 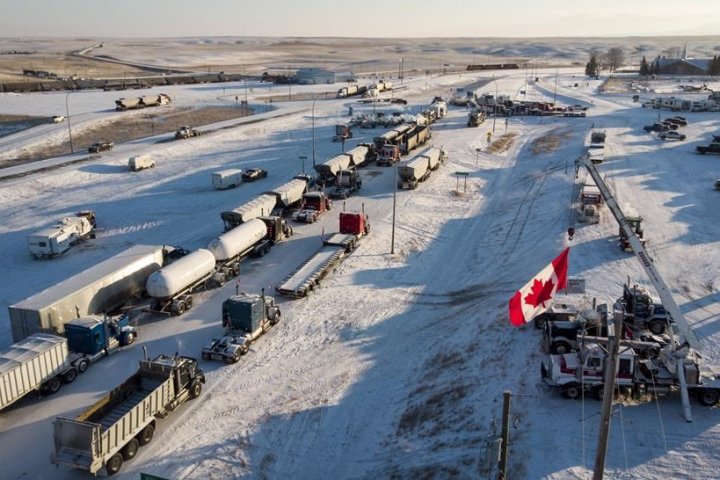 Documents released by the inquiry looking into the government’s decision to invoke the Emergencies Act last winter include text messages between three ministers in which Intergovernmental Affairs Minister Dominic LeBlanc relayed messages he said he received from Kenney.

In messages that LeBlanc said Kenney had written, the then-premier accused Ottawa of not caring about the Canada-United States border closure in Coutts, Alta., and complained about the federal decision to decline Alberta’s request for military equipment that could help remove protest vehicles.

In an apparent reference to Trudeau, a message attributed to Kenney said: “Your guy has really screwed the pooch.”

“Calling them all Nazis hasn’t exactly helped. And now the provinces are holding the bag on enforcement,” the message read.

The message continued with an allegation that private vendors would not provide tow trucks or other heavy equipment to “move these freakin’ trucks” because protesters, described as “crazies,” were making death threats.

“And you guys turned down our request for army equipment to help us. Because apparently, the Government of Canada doesn’t really care about the international border being closed,” the message said.

“But don’t worry, the RCMP commander in Alberta just told me proudly that he has secured some psychologists to do a profile assessment on the protesters. I said, ‘that’s great news, deputy commissioner, ‘do any of them know how to drive a tow truck.'”

In response to the texts that LeBlanc said were from Kenney, Alghabra wrote: “Speaking of bonkers.” LeBlanc replied: “Totally.” Further text messages in the conversation were not released.

The blockade in Coutts forced the closure of the highway and border crossing for more than two weeks before it was broken up on Feb. 14, when RCMP seized guns and charged four men for conspiracy to commit murder.

The same day, the federal government moved to invoke the Emergencies Act in response to continued protests in downtown Ottawa.

The Public Order Emergency Commission, which is in its final week, has previously heard that Prime Minister Justin Trudeau’s cabinet was highly concerned about the possibility that the “Freedom Convoy” might inspire further protests after demonstrators’ blockade in Coutts and another six-day border closure in Windsor, Ont.

The inability of authorities to convince or find tow truck operators willing to remove protest vehicles was one of the reasons Trudeau’s government has argued the Emergencies Act was necessary, because it gave law enforcement the authority to compel companies to do the job.