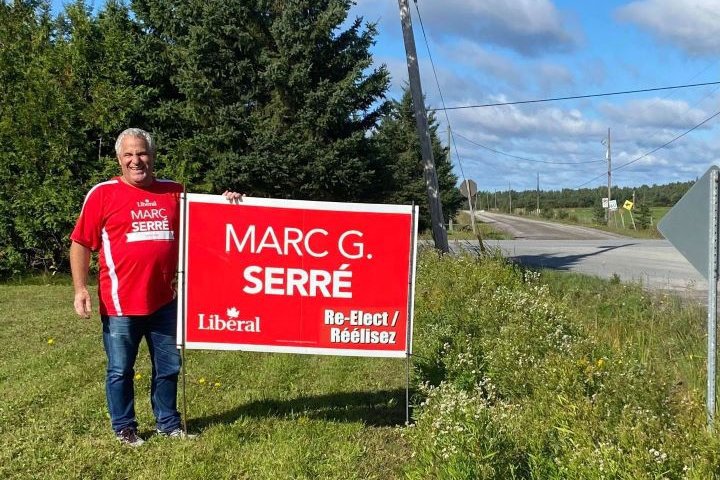 Ontario’s Sudbury police service has charged a woman with assault following a “disturbance” at a Liberal candidate’s election campaign office on Tuesday morning.

According to police, a woman entered Nickel Belt Liberal incumbent Marc Serré’s office at about 10 a.m. and began yelling and acting in a “hostile” manner.

Officers said Serré was standing between a table and a wall when the woman pushed the table against the Liberal candidate, pinning him against the wall. As Serré started to record the incident with his phone, police allege the woman started to hit Serré’s hands with her own phone.

Police said the woman was yelling at the Liberal incumbent and his staffers, claiming she had been injured by one of his election signs.

Officers said staff repeatedly asked the woman to leave — and she initially refused — although she eventually left the property. However a little while later, Serré was leaving in his car when the woman jumped out in front of him and started hitting the hood of the vehicle, yelling, police alleged.

Officers said the woman then tried to go into the campaign office again to get belongings that she had left behind, though the door had already been locked, so she started to kick the door.

In response to the incident, the 56-year-old woman was charged with assault with a weapon.

On Tuesday afternoon, Serré released a statement, saying he, his staff and volunteers are safe.

“Political disagreements need to be settled at the ballot box, not with violence, aggression, harassment or intimidation either in person or online,” the Liberal candidate said.

“I still believe in the good of the people in Nickel Belt, in the democratic process and in equal opportunity for all.”

The support has been appreciated. Merci pour votre soutien. pic.twitter.com/YCY7cuTiae

“(Marc Serré) is a kind man and a great public servant,” Del Duca said on Twitter. “My thoughts are with him and his team at this time.”

The 56-year-old woman was released with a November court date. Her name can’t be released since the information hasn’t yet been sworn to through the court process.

There’s been several incidents of vandalism and verbal altercations during the current federal election campaign.

Many signs have been vandalized, and over this past weekend, another Ontario Liberal candidate said his car was defaced with anti-Liberal messages.

Last week, police also arrested a man in connection with an incident in which gravel and small rocks were thrown at Liberal Leader Justin Trudeau during a stop in London, Ont.