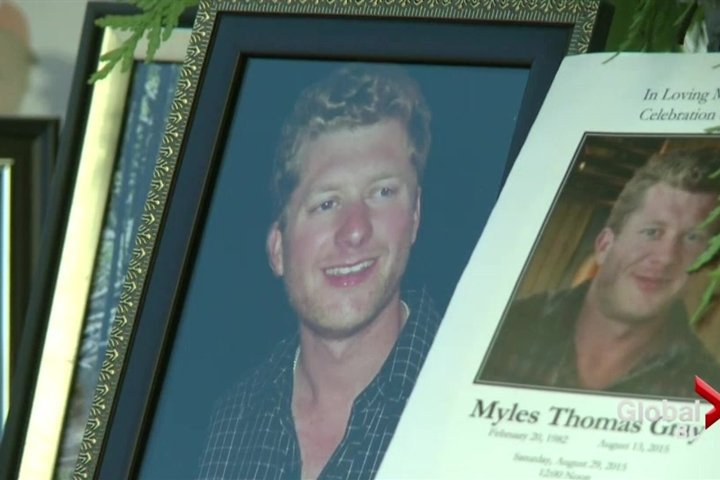 The family of a man killed during an altercation with Vancouver police seven years ago say they’re doubtful they will attend a coroner’s inquest into his death.

Myles Gray, 33, was unarmed when he died in a backyard on the Vancouver-Burnaby boundary in August 2015. Police had been called when he allegedly confronted a homeowner for watering her lawn during a drought.

Adding insult to injury, Margie said, she learned about the inquest from a local reporter, rather than the BC Coroners Service.

“I wasn’t aware of it and nobody in my family was aware of it, so I was infuriated,” she said. “It’s just frustrating. There’s no communication, zero regard for the family, actually. Very inconsiderate.”

The Vancouver police officers who responded restrained Gray’s arms and legs, punched, kicked and kneed him, pepper-sprayed him and struck him with a baton.

His injuries were so severe that a cause of death could not be determined. An autopsy showed he suffered a fractured voice box, a ruptured testicle, a broken nose, sternum and eye socket and a dislocated jaw.

“The coroner told us, ‘Myles’ body speaks for him. His injuries are what will speak for him.’ But even that, they were like, ‘Oh, it was inconclusive,’ so no, nothing speaks for him,” Gray’s sister Melissa Gray said.

“And then we can’t even be there because it’s too traumatizing. So it’s a pretty hopeless situation.”

B.C.’s civilian police watchdog, the Independent Investigations Office, led a lengthy probe into the actions of the responding officers, some of whom were also injured in the altercation.

That investigation, however, was hampered by a lack of cooperation on the part of some officers.

The IIO filed a report to the BC Prosecution Service for the consideration of charges in 2019, but the Crown declined to press charges, saying only that it could not prove, beyond a reasonable doubt, that the officers committed any offence in relation to the incident.

The service said within 20 minutes of the first officers arriving, Gray was unconscious, restrained with hand and leg restraints and “suffering obvious injuries.” He went into cardiac arrest and was declared dead less than an hour later, according to the prosecution service.

A caller to police on the afternoon of Aug. 13, 2015, had described Gray as agitated and disturbed.

The only witnesses to the incident were the seven VPD officers on scene and Gray himself.

“These are the same people who weren’t willing to cooperate, and we’re going to sit there and listen to whatever they want to say? My brother is not there to speak for himself, so they can just say whatever they want,” Melissa said.

“There are 20 minutes unaccounted for in the timeline. The timeline is so messed up. One of the reasons Crown couldn’t charge was because of that timeline, they didn’t know who did what and when,” added Margie.

“What they did to Myles is insane. It’s insane. So why are they being so protected?”

While Crown prosecutors did not lay charges, the Office of the Police Complaint Commissioner is still conducting an investigation of its own under the Police Act, which could make findings of misconduct, though not criminal liability.

The coroner’s inquest — which is mandatory under B.C. law anytime someone dies in an interaction with police — is designed only to determine the facts surrounding Gray’s death, and cannot find fault.

The inquest is scheduled to begin on April 17. A witness list has yet to be released.

— with files from the Canadian Press