Vancouver’s last 2 homeless camps cost the city $6M, the cost of 2 more has yet to be calculated 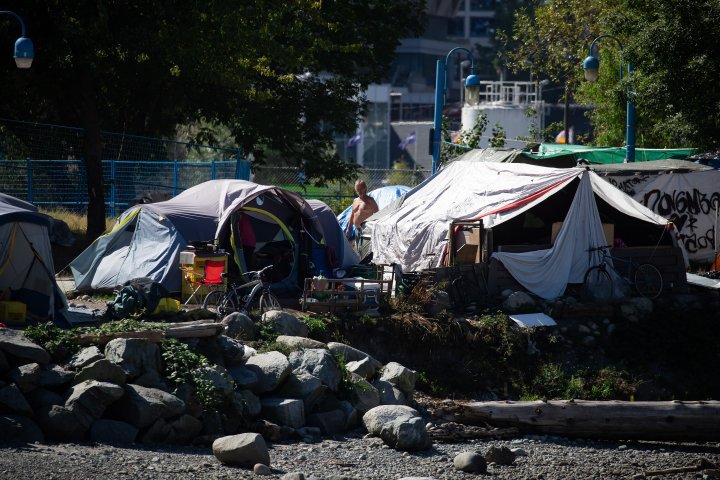 A pair of longstanding homeless encampments in the City of Vancouver have cost taxpayers more than $6 million since 2018, data obtained by Global News shows.

City records obtained by Global News and in response to a Vancouver Police Department freedom of information request revealed more than $3.5 million in services and costs associated with the 18-month Oppenheimer Park encampment from October 2018 to June 2020.

That figure excludes fire costs, which are estimated to be at least $363,400, for enforcing the fire chief’s order in 2019.

The estimated city-wide total costs of the Strathcona Park encampment from June 2020 to Oct. 2021 are $2.2 million, according to the city.

Strathcona’s price tag includes $620,000 spent by the Vancouver Park Board to remediate five-plus hectares of the East Vancouver greenspace in the six months after the 10-month encampment ended in April 2021.

“People died you know, as a result of those encampments,” Lewis told Global News in an interview Thursday.

“That is way bigger than any number could be.”

Last May, a man was murdered in CRAB Park, and the ongoing encampment there saw a mass stabbing in October and a major tent fire in December.

An innocent man was also murdered in the previous Oppenheimer Park encampment. The same encampment also was the scene of a shooting and what Vancouver police described as a “horrific” sexual assault.

Strathcona Park’s tent city was the scene of fires, overdose deaths and the serious assaults of two men, one of whom later died.

Lewis, who said she was attacked by a stranger during the chaos associated with the Strathcona Park encampment in Oct. 2020, is hopeful the new ABC majority on Vancouver city council will be more proactive in addressing the issue.

“Not only for our neighbourhoods but also, most importantly, for the people, for the true vulnerable people living within these encampments, because they deserve better.”

“These challenges did not creep up overnight and they are significant and they will take time,” Ken Sim told Global News in an interview Thursday.

B.C. Premier David Eby has said he does not support encampments, and Sim said the city is working with the province, which has agreed to oversee the path forward.

When asked how much more city money will go into encampments, Sim said the new civic government will be fiscally prudent but admitted there will be necessary expenditures.

“Make no mistake about it, we have a humanitarian crisis going on in our city and we will be allocating resources to these issues,” Sim said.

The money spent on Strathcona Park’s encampment alone could have covered many city initiatives – including the $2.2 million Chinatown Action Plan approved by council earlier this week.

“It’s definitely not a good use of taxpayer funds when we have so many pressing issues,” Green city councillor Pete Fry said.

But as long as the courts maintain people cannot be evicted from parks if viable housing alternatives are not available, Fry said the city’s hands are effectively tied.

“It really puts the City of Vancouver and the Vancouver Park Board in a very difficult position,” he added.

The costs of the ongoing CRAB Park encampment, which was established in May 2021, have yet to be calculated.

The park board recently installed a new transformer to provide electricity to the encampment after a spokesperson said vandalism to the power supply was discovered in December, resulting in major electrical hazards.

“Let’s build places where people can live that are preferable to sleeping in a tent outside, and then I think you’ll actually see a shift,” Lewis said.