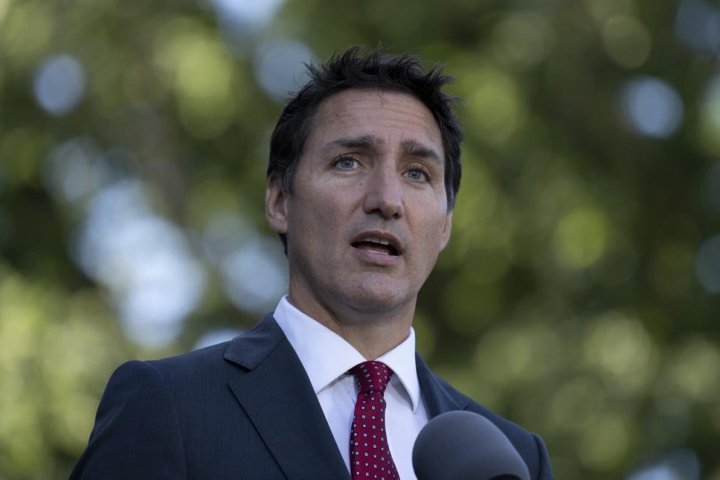 His comments follow the recent discovery of a mass burial site in Ukraine that appears to show evidence that some of the dead were tortured. Trudeau said at a press conference in England that the actions of Russia “clearly include war crimes.”

“The U.K. and Canada…stand up in support of Ukraine and push back against Russia’s illegal actions which increasingly, clearly include war crimes…whether we think of what we found in Bucha or the discoveries of mass graves in reclaimed territories by Ukraine,” said Trudeau.

Trudeau said Russia’s President Vladimir Putin, his supporters, and the Russian military “need to be held accountable for the atrocities they’ve had and continue to commit Ukraine.”

The mass graves site near the northeastern city of Izium, recently recaptured from Russian forces, appears to be one of the largest discovered in Ukraine. Some bodies were found to have broken limbs and ropes around their neck.

Ukrainian President Volodymr Zelenskyy spoke in a video on Sept. 16 to underscore the gravity of the discovery. He said more than 440 graves have been found at the site but that the number of victims is not yet known.

Zelenskyy said hundreds of civilian adults and children, as well as soldiers, had been found near Izium’s Pishchanske cemetery after being tortured, shot or killed by artillery shelling.

He cited evidence of atrocities, such as a body with a rope around its neck and broken arms. In another sign of possible torture, one man was found with his hands tied, according to Serhiy Bohdan, the head of Kharikiv police investigations, and Ukraine’s commissioner for human rights, Dmytro Lubinets.

Ukrainian authorities said their investigation was just beginning, and the scale of the killings could rise dramatically.

“The harsh reality indicates that the number of dead in Izium may be many times higher than the Bucha tragedy,” Oleg Kotenko, an official with the Ukrainian ministry tasked with reintegrating occupied territories, said on Telegram.

Bucha is a Kyiv suburb where authorities have said 458 bodies were found after a 33-day Russian occupation. Authorities say they have uncovered the bodies of more than 1,300 people elsewhere, many in mass graves in the Kyiv-area forest.

Zelenskyy, who visited the Izium area Wednesday, said the discoveries showed again the need for world leaders to declare Russia a state sponsor of terrorism.

Meanwhile, in his first public comments on Ukraine’s recent battlefield gains, Putin vowed to press on with the war and warned that Moscow could ramp up its strikes on the country’s vital infrastructure if Ukrainian forces target facilities in Russia.

“If the situation develops this way, our response will be more serious,” Putin told reporters Friday after attending a summit of the Shanghai Cooperation Organization in Uzbekistan.

— With files from The Associated Press