TRAPPED IN CONFLICT: HOW THE CORPORATE MEGAFISHERY CLEARWATER HAS SET THE STAGE FOR VIOLENT CONFLICT IN MI’KMA’KI 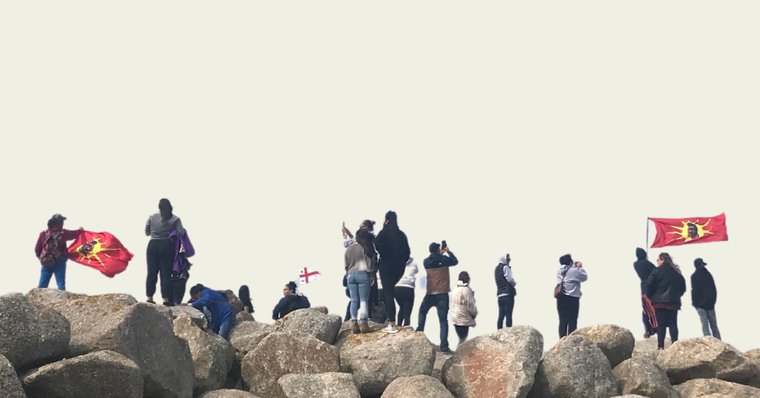 oday across the country, people awoke to reeling images of violence and racism carried out against Mi’kmaq fishers. Many people are asking key questions such as why the RCMP has not pro-actively intervened and defended Mi’kmaq leadership and fishers, what are the economic realities of the fisheries in Mi’kma’ki, and what conservation considerations are at play.

There are a lot of moving parts to the conflict that is ongoing in St Mary’s Bay, Nova Scotia: It is a highly-charged situation, borne out of generations of colonialism, decades of government mishandling and neglect, and months of growing racially-motivated tensions.

But one element not commonly mentioned in the news is the corporate influence on the fishing industry by Clearwater Lobster, a major offshore fishing company headed by CEO John Risley.

Facts about Clearwater
Clearwater Lobster is fishing on unceded, unsurrendered, stolen lands and waters of the Mi’kmaq Nation. Over the last forty years, governments have favoured corporate fishing operations like Clearwater over small scale owner-operators and Mi’kmaq fishers. Both the federal and provincial governments have given the company special treatment:

Clearwater made its own management plan for Lobster Fishing Area 41 (LFA 41) in the 1980s. The company also wrote its own fisheries management plan, conducts its own scientific research (and keeps the results private because it’s “proprietary”), and co-chairs the management board for LFA 41.
Clearwater is subject to extremely minimal outside fisheries observation. Only four per cent of its catch is reported on.
The company owns all eight lobster fishing licences in LFA 41 (though recently sold some to Membertou First Nation). This kind of consolidation isn’t allowed in any other fishing area, and no other company or person has done it.
Clearwater uses one huge fishing boat to fish LFA 41. This boat has 6,500 traps, where an owner-operator commercial boat would have up to 400 and a Mi’kmaq moderate livelihood boat would have 50.
It is practically impossible for Clearwater to drop and collect its traps within 72 hours, which is the required time limit. In January 2019 we learned that Clearwater has been fishing illegally for years, leaving traps for way longer than is allowed, causing unknown harm to lobster and other species, including endangered cod and cusk.
Clearwater fishes year-round, while Department of Fisheries and Oceans (DFO) regulated owner-operators fish only in a set season.
Between 2014 and 2018 Clearwater received more than $4.7 million in loans from the federal and provincial governments, both repayable and non-repayable.
Clearwater not only fishes huge quantities of lobster (1.6 million pounds per year) but also has a near monopoly on arctic surf clams
Clearwater CEO John Risley is one of the richest people in Nova Scotia. He has owned several other enterprises beyond Clearwater, including but not limited to Ocean Nutrition, which makes dietary supplements, and Cable and Wireless Communications which operates in the Caribbean and Central America.
Neoliberalism versus Mi’kmaq Rights
The conflict in St Mary’s Bay is an archetypal clash between a colonial state and an Indigenous nation. In this case, the Mi’kmaq Nation is working to assert its rights on its unceded, though occupied, territories. Meanwhile, the Canadian Government and its precursors have demonstrated their interest in controlling and extracting natural resources. In early settlement days, those resources were lands, fish, pelts, timber, and more; today, they expand into metals, diamonds, fossil fuels and yes... lobster. Canada consistently tries to maintain control over these resources so it can have some control over how power and wealth are distributed. The chosen economic strategy of the Canadian government is neoliberalism – using state power as a tool to extract resources and create private wealth.

This is a very different approach to natural resources than what is being put forward under the ‘moderate livelihood fishery’— a term being used throughout the media's coverage. With a moderate livelihood fishery the idea isn’t to get rich – the idea is to use natural resources responsibly to enable people to live a decent life. This is the Mi’kmaq principle of Netukulimk: to “use of the natural bounty provided by the Creator” sufficient to ensure “the self-support of the individual and the community.” Read more about Netukulimk.

In stark contrast, a colonial government’s neoliberal approach to managing fisheries, the easiest way to extract wealth from the fishery is to integrate and streamline management as much as possible. That’s what’s happened with Clearwater over the last 40 years. One company is far easier to negotiate with and regulate than several thousand small scale fishers.

The facts about Clearwater listed above are not well known by the general public, which works to the advantage of both Clearwater and the governments by allowing Clearwater to operate to keep those facts under the radar.

What does this have to do with the conflict in St Mary’s Bay?
In a complicated situation like this one, who benefits from the chaos? Clearly Mi'kmaq fishers are not benefiting from the violence being enacted upon them and the 20-years of government inaction on the Marshall Decisions. While it is settler fishers who are perpetrating the vandalism and violence that is occurring, they’re not benefitting from this conflict either. Their livelihoods have been put at risk by DFO mismanagement of the fishery as well.

Inshore lobster fishers have fought against Clearwater and the consolidation of the inshore fishery for a long time. Clearwater would love to control the inshore fishery, but that would mean the end to owner-operator fishing, and would mean an end to fishing communities like those around St Mary’s Bay. The inshore fishery is the last small-scale fishery and Clearwater is trying to seize control. Watch this two-part short documentary by Martha Steigman and Sherry Pictou. to learn more: The End of the Line, focusing on the struggle of small-scale settler fishers in the Bay of Fundy, and In Defense of our Treaties, which follows members of Bear River First Nation as they try to protect their treaty rights to fish from DFO pressure.

Clearwater and both levels of Canadian government benefit from the long delay in action on the Marshall Decision because they have not had to relinquish any control over the fishery during that time, and have been able to consolidate power and access to wealth through LFA 41. Additionally, the level of confusion and unrest surrounding the conflict in St Mary’s Bay provides a distraction from this consolidation and lack of action on Mi’kmaq rights.

It is critical that we stand with Mi’kmaq fishers trying to exercise their treaty rights (which were affirmed by the Supreme Court of Canada in 1999), and that we call on the federal government to live up to the rulings of its own Supreme Court. We should not lose focus of the fact that Mi’kmaq people are being subjected to serious intimidation, threats of violence and property damage at all hours of the day and night in St Mary’s Bay. While we hold that in our minds and hearts, we can also recognize that the violence and vandalism is a convenient cover for the web of corporate-friendly, neoliberal policies that the federal government has been creating for decades.

On conservation
Amid this conflict, question and statements about the need to conserve lobster stocks have come up. There is lots that can be said about conservation, and one contribution to this conversation we can make is this: small scale fisheries can provide food and livelihoods for communities while protecting the integrity of the environment. It is hard to imagine how consolidation and massive Clearwater-type fishing can be sustainable – 4,600 traps at a time in sensitive deep-water ecosystems, leaving traps in the water for so long that many animals get stuck inside and die. These are the kinds of fishing practices that conservation groups tell consumers about to get them to avoid purchasing the products.

To learn more
To stay informed about what is going in St Mary’s Bay, also known as the Kespukwitk district of Mi’kma’ki, we suggest following Kukukwes.ca, APTN, and the NS Advocate in addition to your regular news sources.a