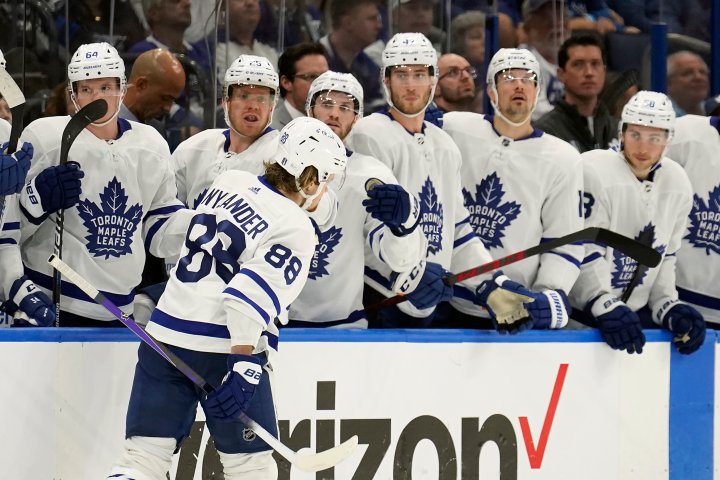 TORONTO — Sheldon Keefe is going back to the well.

The Maple Leafs head coach will dress the same lineup for tonight’s Game 5 against the Lightning, some 48 hours after that group came out embarrassingly flat with a chance to grab a 3-1 stranglehold in their best-of-seven playoff series.

Toronto defenceman Justin Holl turned the puck over less than a minute into Sunday’s debacle, leading to Tampa Bay’s first goal and opening the floodgates at Amalie Arena against the two-time defending Stanley Cup champions.

Keefe said he gave “lots of thought” to making changes, but decided after reviewing the video of the 7-3 loss that tied the matchup 2-2 he would ice the same roster, including keeping Holl with veteran blue-liner Mark Giordano on the third pair.

“To me, he’s coming off his best game, certainly of the two that he played.”

Keefe said the pairing of Giordano and youngster Timothy Liljegren didn’t have the same chemistry in Games 1 and 2 at home as they did late in the regular season after the former captain of the Calgary Flames was acquired from the Seattle Kraken.

The slew of penalties in the tightly officiated series was also a factor in going back to the hard-nosed, defence-first option instead of turning to Liljegren.

“He’s stabilized our penalty kill,” Keefe said of Holl. “There’s a lot of other things, but he’s done a good job there.”

Leafs winger Mitch Marner said Holl has been “unbelievable” when part of the lineup this season.

“Doesn’t get the love he deserves,” Marner said. “He’s not afraid to step up and eat a (shot) block from a big-name guy.

“He made a lot of great plays last game.”

Giordano said that ugly opening wasn’t the whole story of the duo’s Game 4.

“Hemmed in there a bit in our own zone,” he said. “But other than the first shift, I thought we moved the puck well. I thought he was making good reads defensively.

“One of our best penalty killers. He’s a confident guy.”

The Leafs shook their lines up once again at today’s morning skate with Toronto back in possession of the last change at Scotiabank Arena.

Michael Bunting returned to the top trio with Marner and Auston Matthews, while Ilya Mikheyev was with John Tavares and Alexander Kerfoot.

William Nylander, who has spent much of the season with Tavares but was also on the third line in Games 1 and 2, slid down to skate alongside David Kampf and Pierre Engvall.

Keefe said the thinking behind some of the changes was less about spitting up Nylander and Tavares, and more with an eye toward having Mikheyev and Kerfoot on one line, and Engvall and Kampf on another.

Despite the lopsided score in Game 4 _ its been a theme for both teams in a series where neither club’s been able to push back after falling behind _ Keefe said one of his big jobs in the post-season is managing the emotions of his players.

“It’s the playoffs and you’re up and down and it’s a tough thing,” he said. “Even the media is up and down.

“The emotions are all over the place.”