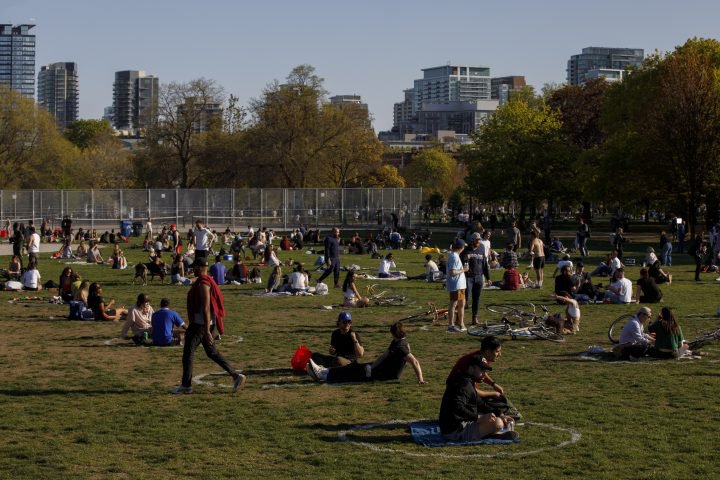 Councilllors in Toronto will once again consider whether or not to lift the city’s ban on outdoor drinking during a council meeting this week.

A motion tabled by Coun. Josh Matlow proposes a pilot through the summer of 2022 that would allow people to drink in Toronto public parks and beaches with toilet facilities between 11 a.m. and 9 p.m.

“I just think it’s ridiculous that in today’s day and age that Toronto — unlike most of the world — still restricts responsible adults from doing something like having a drink together while having a picnic,” Matlow told Global News.

Outdoor drinking is allowed in European cities like Berlin and London.

Matlow’s motion specifies that drinks allowed in parks should be 15 per cent ABV or less, meaning even if the motion passed, liquor in parks would still be banned.

The motion also calls for more garbage and recycling bins to be added to parks and beaches in the city.

A similar motion failed to gain council support in April last year. Coun. James Pasternak called it a “terrible” idea at the time and city staff — including Toronto’s medical officer of health — were reluctant.

Matlow said the success of CafeTO, the city’s sidewalk patio program, and a need to focus on equity in enforcement should convince his council colleagues to think again.

“I think more and more Torontonians have learned through the pandemic we need to try new things,” he said.

The councillor said concerns about encouraging bad behaviour are unfounded and already covered by existing rules.

“My motion doesn’t change the rules when it comes to drunk and disorderly behaviour — you’re not allowed to do that. You shouldn’t be littering, you shouldn’t be behaving badly.”

He said that allowing public drinking was an “equity” issue, one he said would benefit renters who do not have access to a back yard as well as racialized Toronto residents who may suffer from over-policing by bylaw officers.

“Toronto, like some other North American cities, has uneven enforcement with inequitable results,” Matlow’s motion said.

The councillor said that, anecdotally, he had heard concerns the rules were being unevenly applied but the City of Toronto does not maintain the data necessary to demonstrate if the anecdotes are true.

The motion will be referred to Toronto’s Economic and Community Development Committee for discussion if it is passed. A two-thirds majority is required to waive that step.

The City of Toronto will consider the motion on Wednesday, May 11.