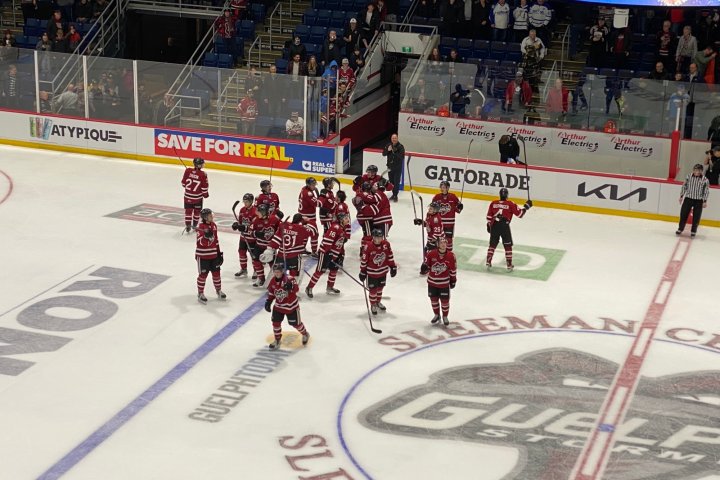 A wild third period allowed the Guelph Storm to come out on top in their game against the Peterborough Petes.

Three goals in 65 seconds turned a 3-2 deficit into a 5-3 Guelph lead and would hang on to beat Peterborough 6-4 on Friday night at the Sleeman Centre.

“Things were coming in really fast,” said forward Braeden Bowman who finished with three points for the Storm. “It all starts with a good forecheck, just doing the right things.”

Both teams exchanged first-period goals, then five minutes into the second period, a bad giveaway in the Petes’ end allowed Bowman to score his first of two on the night for a 2-1 Storm lead.

But Peterborough answered later in the period with two of their own. The second goal, giving the Petes the lead, came on a wild scramble in front of the net.

“It was a bit of a mess in front of the net,” Bowman said. “They kind of found the puck and it went behind the goal line. But I’m glad with the way we responded after that.”

The Petes replied seconds after surrendering the lead in the third and cut the deficit to 5-4.

Connor Lockhart scored twice while Tucker Robertson had three assists for the Petes (23-15-1-2).

“When push came to shove, those guys answered the bell,” said Lockhart on the third period. “They wanted it more and executed plays better.”

Lockhart says a lack of discipline on their part also lead to their downfall in the third.

“Lots of unnecessary penalties, taking penalties while on the man advantage, that’s not going to slide.”

Patrick Leaver made 24 saves for Guelph while Michael Simpson stopped 20 for Peterborough.

The next game for the Storm is this Sunday afternoon when they host the Kingston Frontenacs at Sleeman Centre.