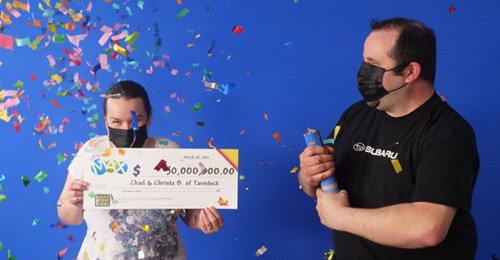 A couple from Tavistock, Ont., are celebrating after having won the $50-million Lotto Max jackpot from the March 16 draw, according to OLG.

The agency says Chad and Christa Breyer had the winning ticket in their car for a week before finally checking it and discovering their newfound fortune.

“I bought the Lotto Max ticket on Sunday for the Tuesday, March 16 draw and put it in the cupholder of my car as I usually do, and went about my business – going to work or running errands – never locking my car,” Chad explained.

“I even went out and bought a Lotto 6/49 ticket for Saturday’s draw with the winning Lotto Max ticket still in my car.”

Christa then convinced him to bring the ticket into the house so she could check it on OLG App.

Her husband drove to the store to have the ticket validated.

“I was so excited I grabbed the ticket and the receipt and ran out of the store and went back home,” the 41-year-old father of two said.

“I didn’t know I had to stay to talk to the OLG representative who called the store a few moments later, but I eventually went back and spoke to OLG about the next steps in collecting this incredible prize.”

Christa, 44, says they don’t just play the lottery for the prize money.

“I was told years ago that money from buying lottery tickets goes back to support hospitals, health care and OLG also gives back to communities – so why not buy a lottery ticket?” she said.

The couple took a screenshot of their prize announcement to share with family, including Chad’s father.

“He told me it couldn’t have happened to a better man,” he said.

“That I’ve worked hard all my life and now it’s paid off.”

OLG says the couple returned to work the day after they won, although they may have been a little distracted.

“I have a few projects that I need to finish first before I think of possibly retiring – I can’t leave my boss and colleagues without completing my obligations first,” Chad said.

The Breyers have already started to make plans on what to do with their winnings.

“We are going to purchase a new home with a big piece of property for our family and also buy a couple of new vehicles – a truck and an all-wheel drive SUV that performs well in our winters,” Chad said.

They also plan to donate to charity and do some travelling once they are safely able to do so.

“I want to return to California,” Christa said

“We went there for our honeymoon many years ago and have been saving airline loyalty points in the hopes of going back but now we can travel there in style.”globalnews