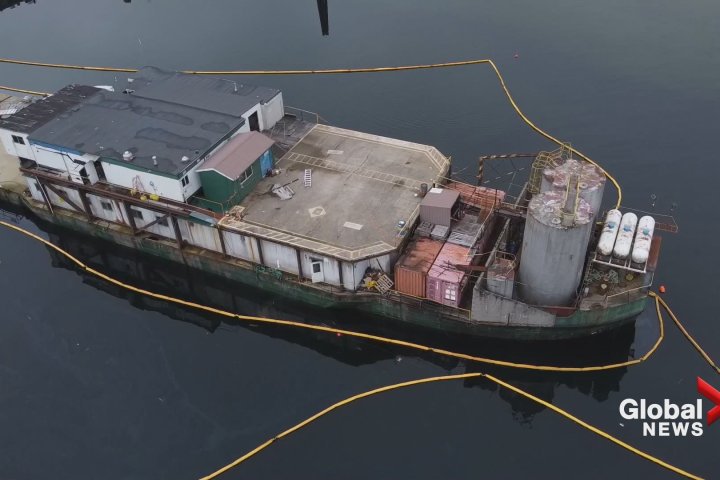 A sunken barge deemed to be of high risk to the marine environment will soon be removed from waters north of Campbell River, B.C.

The 98-metre Trailer Princess went down in February in Duncan Bay, full of potentially-polluting hydrocarbons. Its removal will cost about $4.7 million.

“Canada follows the ‘polluter pays’ principle. This means the polluter is liable for the costs of damage caused by their pollution,” wrote Fisheries and Oceans Canada (DFO) in a Thursday news release.

According to DFO, the Trailer Princess operated as a support barge for a logging operation and had a helicopter platform and fuelling capabilities.

Cleanup and stabilization are currently underway, with removal and deconstruction set to begin next week, the department said.

To date, 89,000 litres of hydrocarbons and oily waters have been removed from the sunken barge.

The Canadian Coast Guard removed about 34,000 litres of gasoline, diesel and jet fuel from its tanks, but could not safely access all parts of the barge due to the hazardous environment during an initial assessment.

A contractor has since removed another 55,000 litres, according to DFO.

The Canadian Coast Guard and Wei Wai Kum First Nation are keeping booms and other absorbent material around the barge and will oversee the salvage operation, DFO added.

Problem vessels across the country are addressed in order of priority, it said.