Social conservatives view growth in Conservative membership as an opportunity 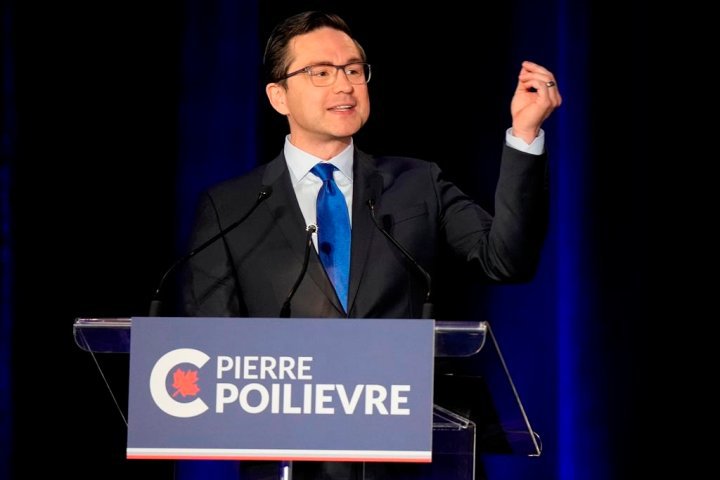 Some social conservatives view the massive influx of new Conservative Party members as an “opportunity” to strengthen their movement’s influence within the party.

It remains to be seen, however, how successful “socon” groups will be at recruiting from the roughly 400,000 new members the party claims to have signed up over the current leadership race – or how beholden the likely next leader, Pierre Poilievre, will be to the faction.

No campaign – or even the party itself – has a perfect grasp on who exactly the new Conservative members are, or what’s motivating them to get involved in partisan politics. But multiple sources who spoke to Global News said a sizeable chunk could be characterized as “freedom” voters, enticed by Poilievre’s anti-establishment narrative. That’s where the socons see their “opportunity.”

Social conservatives are an influential and historically well-organized tribe within the Conservative Party, and their members have exerted their influence over choosing the last two leaders.

In 2017, social conservatives put Andrew Scheer over the top after their preferred standard-bearers – Pierre Lemieux and Brad Trost – were eliminated from the party’s ranked-ballot leadership contest.

In 2020, Erin O’Toole actively courted socon votes in his successful bid to upset Peter MacKay, who had referred to social conservative issues as a “stinking albatross” around Scheer’s neck during the 2019 general election.

The comment became MacKay’s own albatross in a race he was widely expected to win.

But that was when the party had roughly 260,000 members. Now that it has ballooned to an unprecedented 678,708 members, will the social conservatives’ influence in the leadership be diminished?

“I think (it) is an interesting opportunity,” said Scott Hayward, co-founder of the anti-abortion group Right Now, in a recent interview with Global News.

“It’s not hard to find common ground and kind of get people on board,” Hayward said.

In the 2022 leadership race, only Leslyn Lewis – the Haldimand-Norfolk MP who finished third in the 2020 contest – has the unqualified endorsement of Campaign Life Coalition, a prominent anti-abortion group long involved in the Conservative Party.

CLC labeled the remaining candidates, including frontrunner Pierre Poilievre, as “pro-abortion” and have urged their members to give Lewis their first pick and refuse to make down-ballot choices.

Jack Fonseca, the CLC’s director of political operations, said the group believes to have signed up at least 45,000 Conservative members eligible to vote in the Sept. 10 contest, and claimed that was a “conservative” estimate.

Fonseca also noted some overlap between the people attracted to Poilievre’s banner and social conservative causes.

“Many of them have been brought in because of their support of the freedom movement and the Freedom Convoy,” Fonseca said, referring to the protest movement that paralyzed downtown Ottawa and several Canada-U.S. border crossings in February.

Fonseca said that he attended the Ottawa protests himself on two occasions, and that while many of the convoy crowd would not necessarily identify as “pro-life,” they were sympathetic to CLC’s position.

“So I don’t think anything has changed. I think the makeup of the party at 675,000 members versus 200,000 or 250,0000 previously is still the same, in terms of the social conservative makeup of pro-life, pro-family and pro-faith people,” Fonseca said.

Social conservatives are often portrayed as single-issue voters, with the abortion issue trumping everything else. But a senior Conservative campaign source told Global News they see significant overlap between socon political objectives and what they called the “freedom” voter attracted by Poilievre’s campaign.

A second source, who has direct knowledge of the party’s current membership list eligible to vote in the Sept. 10 contest, said they believe a significant number of social conservatives intend to support Poilievre’s bid despite opposition from “social conservative elites.” Both sources agreed to discuss internal party matters on the condition they not be named.

“We’re talking about shared concerns,” said the first source, referring to the overlap between social conservative issues and the so-called “freedom” voter.

Poilievre has largely avoided talking about social conservative issues during the race, and one campaign source suggested because they had signed up so many new members – more than 311,000, according to the campaign – the Carleton MP would be less beholden than previous leaders to any internal factions.

A key indication of the strength of the social conservative movement will be where Lewis places on Sept. 10. Some of her supporters, including Fonseca, hope for victory but are suggesting she could realistically place second behind Poilievre – and ahead of former Quebec premier Jean Charest.

Even a strong third-place finish would be a statement about the priorities of the new Conservative base – and the social conservatives’ power within it.

“For the Conservative Party to win the next election, they’re going to need to engage and have a base of support that’s excited and ready to go, and that includes social conservative members and volunteers and donors across the country,” said Steve Outhouse, a veteran Conservative activist who is once again managing Lewis’ campaign.