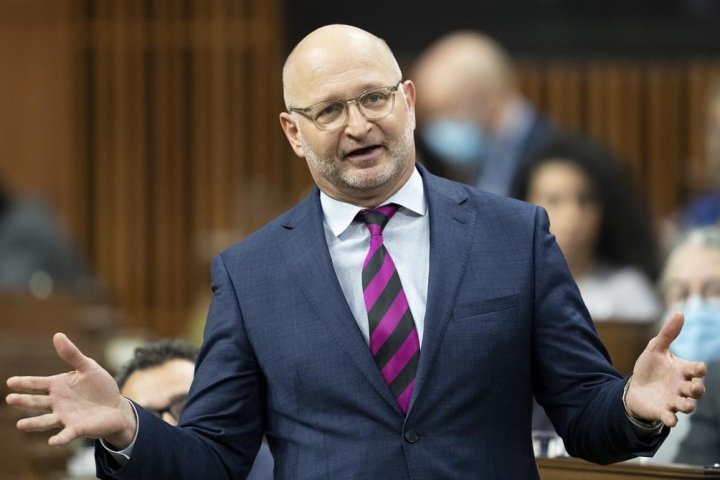 As the “Freedom Convoy” dug in its heels in downtown Ottawa earlier this year, Justice Minister David Lametti said in a text that then-Ottawa police chief Peter Sloly was “incompetent,” internal texts made public during the Emergencies Act inquiry revealed.

The texts also showed that discussions about the possibility that the Emergencies Act could be invoked began as early as Jan. 30, which was the Sunday of the first weekend the protest had arrived in Ottawa.

“Do we have a contingency for these trucks to be removed tomorrow or Tuesday? (if they were black or indigenous…),” Lametti wrote in a text sent to his chief of staff, Alex Steinhouse, on Jan. 30.

Lametti said the latter part of the text was a reference to “legitimate criticism” that was levied against police beginning that first weekend, including accusations that police were treating the convoy differently than they would have treated Black or Indigenous blockades.

He also asked in those Jan. 30 texts what it would take to deal with the matter.

“What normative authority do we have or is some order needed? EA?” he texted his chief of staff.

Lametti’s chief of staff replied that they had “not been told of any contingency planning to remove anyone.”

As the days continued, Lametti testified on Wednesday that he had grown frustrated with the realities of living through the demonstration, and that his life “had been altered” by the ongoing convoy protests.

In a text sent to Public Safety Minister Marco Mendicino in what Lametti described as “the heat of the moment” on Feb. 4, he expressed his frustration with the “lack of a multilayered plan.”

“Sloly is incompetent,” he added in a follow-up text.

With the “benefit of hindsight,” Lametti said on Wednesday that he would “soften” his position now, and would “happily walk that back in the light of hindsight.”

“My staff was being harassed when they went into work by convoy members who took issue with them wearing masks, particularly my female staff members on my ministerial team, and I was quite frustrated. I will admit,” Lametti told the inquiry.

That same day — 10 days before the Emergencies Act was invoked — Lametti received a text from his chief of staff that read “I believe the angle is incoming the emergencies act.”

When asked what the text meant, Lametti said he understood it as describing the “preparatory work for” the Emergencies Act.

“It was about preparing for the possibility — not preparing in any way for the introduction of the Act, but rather doing our due diligence as lawyers within the justice department and in our ministry in order to make sure that if we were to use it, we would be prepared,” Lametti testified before the commission.

Lametti is the first of three federal ministers slated to testify Wednesday at the public inquiry.

Defence Minister Anita Anand and Transport Minister Omar Alghabra are also on the witness list as the inquiry digs into Ottawa’s decision to invoke the Emergencies Act in response to the weeks-long demonstrations.

Anand is likely to face questions about Alberta’s request for help from the Canadian Armed Forces to handle a border blockade in Coutts, though the military was not brought in as part of the emergency powers.

Alghabra, whose testimony is expected last, is likely to be asked about the economic costs of border blockades, since his department was the one to calculate the $3.9-billion cost of border shutdowns.

The Public Order Emergency Commission is in its sixth and final week of public hearings, with Prime Minister Justin Trudeau expected to testify on the final day of proceedings Friday and a final report to be delivered to Parliament by early next year.