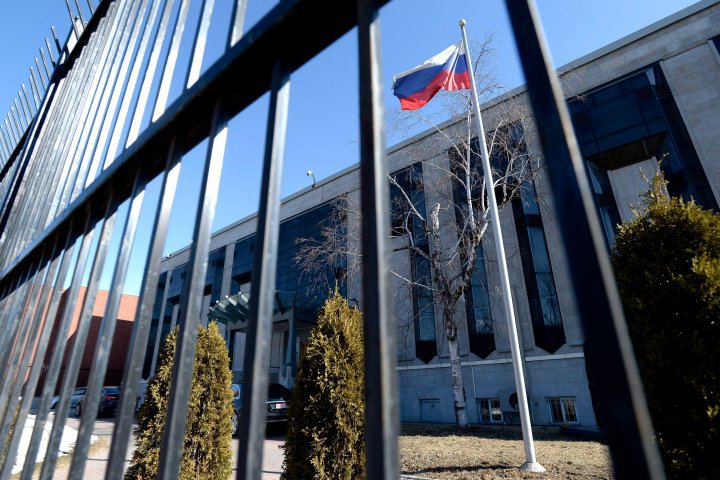 Russia‘s recent complaints about its Ottawa embassy being blocked by protesters and attacked with a Molotov cocktail shed light on the tricky balance Canada faces in protecting diplomatic missions.

“We have an unquestioned responsibility,” said Roy Norton, who served as Canada’s protocol chief from 2016 to 2019, overseeing the security of diplomatic missions within Canada.

“We take it seriously; we honour it and we expect others abroad to honour it,” he said.

In September, Russia summoned Canada’s ambassador in Moscow over concerns that officials in Ottawa weren’t taking complaints about security incidents at the embassy seriously.

That includes apparent security-camera footage, which the embassy posted on Twitter, that shows an unidentified person tossing what the embassy says was a lit Molotov cocktail over the fence. The RCMP said earlier this month that it is investigating the incident.

The embassy also complained that a mid-September protest against Russia’s invasion of Ukraine blocked people from accessing consular services, even as Ottawa police looked on.

The RCMP and the Ottawa Police Service declined interview requests.

The embassy has asked Ottawa to provide 24/7 security, which Norton said is a common request.

“I wouldn’t say that embassies exaggerate their fears, but they are going to err, quite naturally, on the side of caution,” Norton said.

Under the 1961 Vienna Convention, countries incur obligations to protect diplomats when they formally accept ambassadors from foreign states.

In accepting an ambassador, the hosting country “shall treat him with due respect and shall take all appropriate steps to prevent any attack on his person, freedom or dignity,” the convention reads.

That includes protecting the premises of the embassy and the ambassador’s private residence “against any intrusion or damage, and to prevent any disturbance of the peace.”

For example, Canadian law enforcement will only intervene in protests that pose a real risk of violence. But the Chinese embassy in Ottawa often deems human-rights demonstrators to be hostile, he said. That embassy did not respond to a request for comment on Friday.

The Israeli embassy says it will often reach out to Canadian officials when events in the Middle East are more likely to produce a security threat to its staff abroad.

Norton said that is a normal cycle that Canadian diplomats abroad will also tap into.

Earlier in his career, he was posted to Canada’s missions in Washington, D.C., Detroit and Chicago. He was working in Chicago on Oct. 22, 2014, the day a gunman killed Cpl. Nathan Cirillo at the Canadian National War Memorial in Ottawa and stormed Parliament Hill.

Norton recalled phoning Chicago police in the wake of the attack to see if extra protection was possible, not knowing at first whether it was an isolated incident or a wider assault on Canadian officials. Police stationed an officer in the lobby of the consulate’s Chicago office building for the day, Norton said.

Robert Collette, who served as Canada’s protocol chief from 2003 to 2005, said he was regularly in touch with Manila officials when he was ambassador to the Philippines.

In either 2002 or 2003, local officials warned him Canada was among a handful of embassies targeted by bomb threats, he said. After consulting with Ottawa and Philippine officials, the embassy shut down for a month, with diplomats working from home and operating its immigration section out of a hotel.

Collette still continued his work and was driven around Manila in an official car that had a Canadian flag to demonstrate the country still had a presence. The Philippine government provided an officer to follow him 24/7.

Back in Canada, Collette recalled working with the Americans shortly after they opened a new Ottawa embassy in 1999, a set-up that included bollards that take up part of the sidewalk outside.

After 9/11, the embassy successfully lobbied to temporarily restrict traffic on Sussex Drive outside the embassy.

They check if embassies feel they have adequate security, and if there are any upcoming days that might merit more police resources, such as certain holidays or anniversaries of difficult events.

The staff also make their own suggestions based on Canadian intelligence, such as when they feel a crackdown abroad is likely to bring a diaspora group in Canada out in droves to an embassy or consulate. The two municipalities also notify the department about permits issued for demonstrations near embassies.

Norton said the RCMP ultimately makes the call, with the help of CSIS, on how to offer protection. That can mean a Mountie follows an ambassador around the clock for a set period, or the RCMP stations a car outside the mission for a few days.

“It’s huge expense; it’s three shifts a day, and there are 130-odd missions in Ottawa. So it’s risk-management,” Norton said.

More often, the RCMP will simply increase the number of times a day they circle past an embassy.

“Fewer things happen in Ottawa than Ouagadougou, and so we can get away with applying fewer resources,” he said, referring to the capital of Burkina Faso.

Colin Robertson, a former Canadian diplomat, says that can be a draw.

“Ambassadors with families love to come here, because they don’t have to live behind gates with private security,” said Robertson.

Actual attacks on diplomatic staff in Canada are rare, but not unheard of.

Experts said all countries generally go to great lengths to protect foreign diplomats and missions, even if the two countries are in a protracted conflict.

“The RCMP and CSIS are always extremely conscious and careful to provide the best protection possible, under any circumstances,” Collette said, whether or not Canada is in agreement with the other country’s actions, like with Russia and its invasion of Ukraine.

“We protect as best as we can, because also we wish that our diplomats and our chanceries in other countries be given equal protection and equal treatment.”