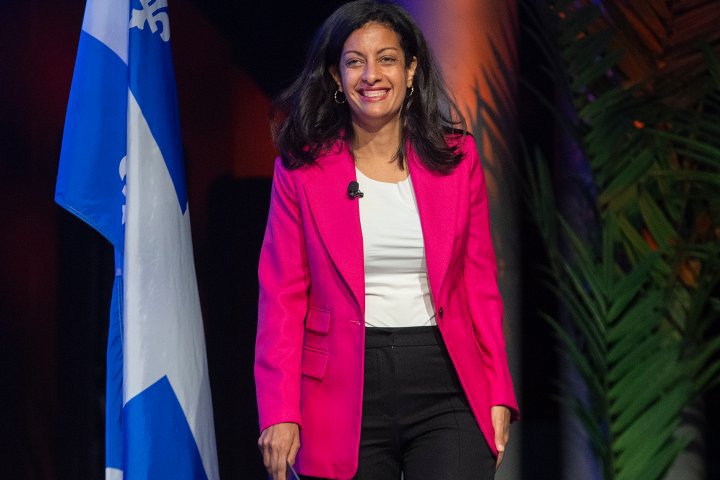 Quebec Liberal Leader Dominique Anglade faced questions Monday about her political future, as her party sputters toward election day and hasn’t been able to field a full slate of candidates.

Anglade said she plans to stay on as Liberal leader after the Oct. 3 election – but she maintained that’s because her party will win.

“My intention is to remain in office and to be premier of Quebec,” she told reporters in Montreal.

Recent polls have put the Liberals more than 20 percentage points behind the governing Coalition Avenir Quebec party, and the numbers indicate that Anglade’s own Montreal riding –St-Henri–Ste-Anne– is a three-way race.

Following Saturday’s deadline, the Liberals have fielded 124 candidates for the province’s 125 ridings –the only major party without a full slate.

With two weeks left in the campaign and the second leaders debate on Thursday, Anglade said she believes there’s still time to convince voters.

“Don’t underestimate the Liberals,” she said.

CAQ Leader Premier Francois Legault, meanwhile, has said the election is a two-way race between his centre-right party and left-wing Quebec solidaire.

But Conservative Party of Quebec Leader Eric Duhaime said Legault only said that because the incumbent premier sees the left-wing party as too radical for most Quebecers and easiest to beat.

“Mr. Legault likes to pretend that Quebec solidaire is his adversary because he knows it’s the weakest. Because it’s the most radical, it will be easiest to knock down their ideas,” Duhaime told reporters in Quebec City Monday.

Legault is most worried about the Conservatives, Duhaime said, because the premier has been campaigning in Quebec City ridings  –where the Tories enjoy the strongest support– instead of the Montreal area and other urban ridings held by Quebec solidaire.

Anglade was in Montreal to announce her party’s promises for seniors, which include payments of up to $2,000 a year to help people over 70 receive health care at home and avoid having to move to a seniors home.

The Liberals, she said, would stop requiring people 62 and over to make contributions to the provincial pension plan, adding that the party would also double the amount people 65 and over can earn before having to pay income tax, to $30,000.

Duhaime said his party has filed access to information requests for studies conducted on a proposed new bridge or tunnel between Quebec City and its suburb Levis, Que., as well as for reports on the safety of an existing bridge.

The proposed new connection across the St. Lawrence River –known as the “third link”– has become a major issue in the region.

The CAQ has proposed building a tunnel between downtown Quebec City and central Levis, while Duhaime wants to build a bridge linking the eastern part of the two cities.

Duhaime, who said a bridge would be cheaper and easier to build, has accused the CAQ of attempting to hide reports that don’t support its plan.

Earlier in the day, Quebec solidaire spokesman Gabriel Nadeau-Dubois was in Quebec City, where he said his party would ban large companies from throwing out unsold food.

Quebec solidaire’s plan is to reduce “food waste” by 50 per cent.

He said big companies and public institutions would be required to send unsold food to organizations that would distribute it, like food banks, or companies that would process it, like juice manufacturers.

Parti Quebecois Leader Paul St-Pierre Plamondon was in Sept-Iles, Que., 640 kilometres northeast of Quebec City, where he promised to impose a 25 per cent tax on the “excess profits” of oil companies.