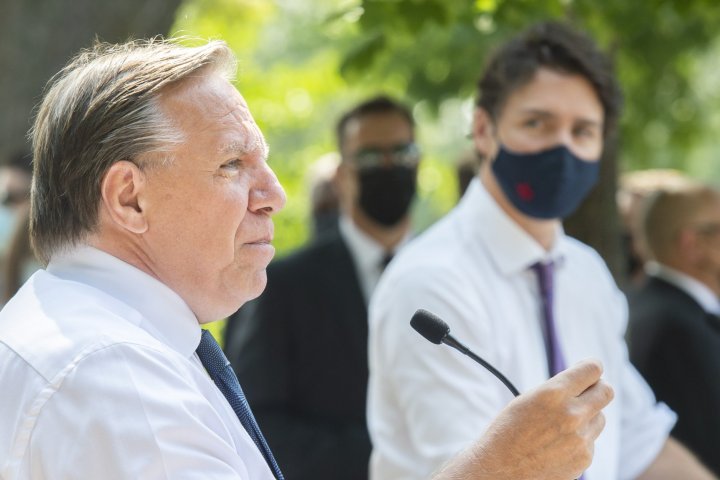 Prime Minister Justin Trudeau congratulated Legault after the Quebec premier’s Coalition Avenir Québec (CAQ) was projected to form a second majority government, vowing to work together moving forward. But court challenges and a looming fight over immigration are bound to test that promise.

“There are simply fundamental differences between them in the way they see the federation.”

Legault’s first term saw his nationalist agenda clash with Trudeau’s Liberal government a number of times — most notably when the prime minister and members of his cabinet openly criticized Quebec’s secularism law, known as Bill 21, and Bill 96, which bolsters protections for the French language.

Both bills are currently before the courts in Quebec, and Ottawa has promised to join a legal challenge to Bill 21 if it reaches the Supreme Court of Canada.

Legault has also been one of the most vocal premiers calling on Trudeau to increase federal funding for health care, which has been met with resistance by the Liberals. Legault has gone further by insisting that any health transfer top-up must also respect Quebec’s ability to govern its own health-care system without federal interference.

During the 2021 federal election, Legault even went so far as to say then-Conservative leader Erin O’Toole would be easier to work with as prime minister, calling the Liberals, NDP and Greens “dangerous” to nationalist interests.

Now that Legault is set to be premier through the rest of Trudeau’s current mandate, more fights are expected in the years ahead.

Most crucially, Legault has caught attention with his push for further immigration powers over family reunification — a responsibility currently shared between the provincial and federal governments — in order to limit non-French-speaking migration into Quebec.

Last spring, when Legault promised to make the dispute a campaign issue, Trudeau said he had no intention of relinquishing any of those powers.

“It’s clear that a country must have a say in its immigration,” he told reporters then, assuring the protection of French and francophone immigration was “very important” to his government.

Yet Legault has doubled down on his demand during the campaign, including not ruling out the possibility of a referendum on the issue. He also sparked criticism from voters and federal Liberal caucus members by saying non-French-speaking immigration to the province is a threat to “national cohesion.”

Quebec currently accepts about 50,000 immigrants a year. Going beyond that number would be “suicidal,” Legault said last week, because it would be impossible to properly integrate them and teach them French.

“It was a good talking point during the campaign … but I’m not overly certain that (Legault) will make a big deal out of this,” said André Lecours, a political science professor at the University of Ottawa.

Although Legault has claimed family reunification cases represent at least 20 per cent of all immigrants entering Quebec annually, Lecours says most Quebecers agree that wouldn’t lead to as big a threat on French as the premier makes it out to be.

Lecours predicts the true contention between Quebec City and Ottawa will come in the ongoing legal battles over bills 21 and 96, and whether the federal government follows through on its promise to join any federal appeals.

“There will be a structural collision there … and I don’t think the prime minister wants it, but it’s likely coming at some point,” he said.

Beland says Legault could also cause headaches for the federal Liberals by continuing to align with other right-leaning premiers across the country like Ontario Premier Doug Ford on not just immigration, but also health-care funding and economic issues.

He may also find solidarity with the next premier of Alberta, where the candidates to replace United Conservative Party leader Jason Kenney have made varying appeals for their own sovereignty.

“These are all things the Liberals in Ottawa are very much aware of,” Beland said.

Legault’s expanded mandate after Monday’s vote — increasing the CAQ’s seats in the national assembly to 90 from 74  — will also be a factor moving forward.

Although Trudeau and his government have pushed back on some of Legault’s more nationalistic moves, Beland adds the Liberals have to be careful about not starting an intergovernmental war with the strongly-supported premier of a vote-rich province.

He expects more attempts at outreach, such as the proposed changes to the Official Languages Act last year that would boost French immersion courses across the country and some French-language protections in federal workplaces, in the years to come.

“So long as Legault remains popular, there will be a strong incentive for Trudeau and the Liberals to … meet in the middle and remain diplomatic on some issues,” he said.