Putin wants Kremlin-approved history to be prioritized in Russian schools 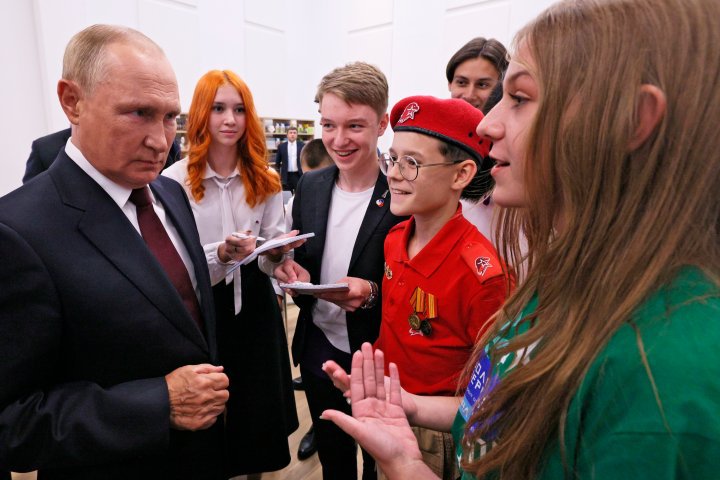 Russian President Vladimir Putin on Thursday stressed the importance of teaching a Kremlin-approved version of history, saying many children in eastern Ukraine did not know that Ukraine and Russia had once been part of the same country.

Putin met selected schoolchildren from all over Russia in a classroom in Kaliningrad for the “Talking about what’s important” lesson that starts the school year nationwide, restating his assertion that he had been forced to send troops to defend the Russian-speakers of eastern Ukraine.

In an hour-long question-and-answer session, Putin said he had been shocked to discover that children in east Ukraine did not know their country had been part of the Soviet Union with Russia, and that correcting the record was a vital task.

Putin called the wave of protests that forced Ukraine’s pro-Russian president from office in 2014 a “coup.”

“Everybody thinks that some kind of aggression is coming from the Russian side today,” Putin said, in a televised session that verged on the awkward as a succession of children asked to shake his hand.

“But nobody understands, nobody knows that, after the coup in 2014, the residents of Donetsk, a large part of Luhansk and Crimea did not want to recognize the coup,” Putin said. “A war was started against them – and it was waged for eight years.”

Shortly after President Viktor Yanukovych fled Kyiv, Russia seized and annexed Crimea, and backed rebels who succeeded in taking control of parts of Luhansk and Donetsk in east Ukraine.

Kyiv and its allies dismiss the idea that Russian-speakers had been persecuted as a baseless pretext for Moscow to try to seize more of Ukraine and topple President Volodymyr Zelenskyy.

Putin said it was important that schools in Russia and Russian-occupied parts of Ukraine teach the Moscow-approved curriculum – which largely disavows Ukraine’s sovereignty and history as an independent nation since 1991.

Since invading Ukraine, the Kremlin has pushed schools to be more patriotic: from Thursday, all pupils start the week with a flag-raising ceremony and the playing of the national anthem.

Putin also chaired a board meeting of a new government-created youth group drawing on the traditions of the Soviet-era Komsomol and Pioneers – youth wings of the Communist Party.

The still-unnamed group is the latest iteration of attempts to forge a nationwide pro-Kremlin youth movement. Previous versions include the now-defunct “Nashi” (“Our People”), which had more than 100,000 members at its height in the 2000s.

(Reporting by Reuters; Editing by Kevin Liffey and Jonathan Oatis)