Pair comes back from slow start to land on podium 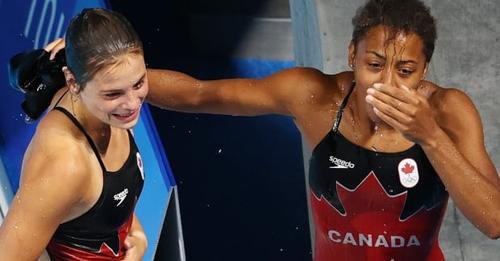 In their first Olympics together, Canadian divers Jennifer Abel and Mélissa Citrini-Beaulieu showed poise, patience and precision to land on the podium on Sunday afternoon in Tokyo.

Abel and Citrini-Beaulieu captured silver in the women's synchronized three-metre springboard competition to secure Canada's second medal at these Olympics.

The two fought back tears as they hugged each other on the deck after their final dive, knowing a medal was in their grasp.

"We didn't let fear win on this day," Abel said. "We made it. It was a proud moment. It was emotional. Relief. All of the emotions and stress that we had coming into this."

Abel and Citrini-Beaulieu joined forces after the Rio Olympics, both feeling as though their diving style suited each other perfectly. It was the right decision.

Their five dives were executed brilliantly inside the Tokyo Aquatics Centre to secure silver.

"I just tried to stay calm and focus on the moment. It was hard, but we did it and I'm so proud," Citrini-Beaulieu said.

"All the work we've put in together. It talks a lot about our partnership. We would not be here without each other."

The two had been building toward this performance and knew if they delivered what they were capable of in Tokyo, they would end up on the podium.

"For us it was a moment where we did it and proved to ourselves that we're the best team that Team Canada could have in diving," Abel said.

Chinese divers Wang Han and Shi Tingmao were nearly flawless to win gold with 326.40 points, well ahead of Canada at 300.78. Germany's Lena Hentschel and Tina Punzel finished third at 284.97.

The Canadians started slow but stayed consistent throughout the five dives. It wasn't easy finding their way to the podium on Sunday.

After the first two dives, the Canadians found themselves in sixth, but things soon changed. Abel and Citrini-Beaulieu delivered a difficult third dive to shoot up to third with two dives remaining.

"I knew I could do this, I just had to do what I can do. And I trusted Jenn and knew she would do what she had to do," Citrini-Beaulieu said.

They saved their best for last, nailing their fourth and fifth dives under pressure to secure silver.

Canada has won 13 Olympic medals in diving since the first was won by Irene MacDonald at Melbourne 1956. Canadian divers have stood on the podium in at least one event at every Games dating back to Atlanta 1996.

Rio redemption for Abel
For Abel, it's her second Olympic medal after winning bronze in London in 2012 alongside Émilie Heymans.

But the Montrealer wasn't able to find the podium in Rio with diving partner Pamela Ware — she placed fourth in both the individual and synchronized events. 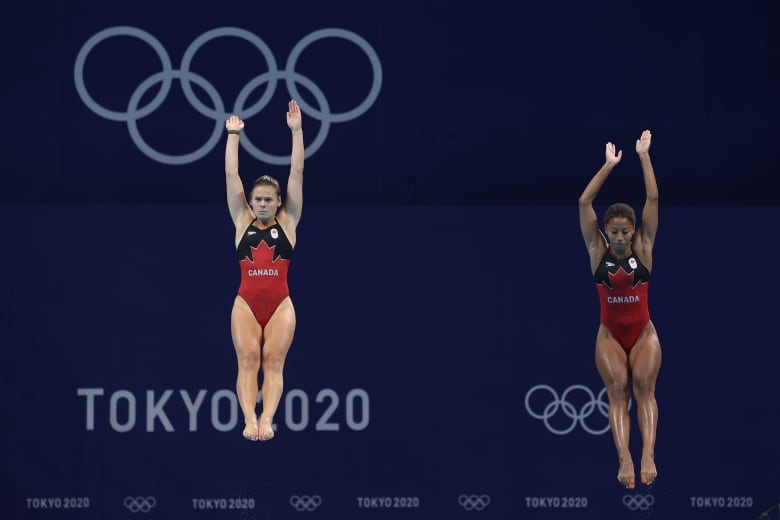 It was bitterly disappointing for Abel. But the 29-year-old said she learned valuable lessons in defeat that reignited her passion for diving.

"In Rio one of the biggest mistakes I made was focusing on the medal," Abel said.

"It wasn't easy coming here not focusing on the medal because we've been finishing second in every world championship since 2017."

Dazzling debut for Citrini-Beaulieu
Citrini-Beaulieu, the 26-year-old from Châteauguay, Que., made her Olympic debut in Tokyo. She looked unfazed by the big moment.

When the two teamed up prior to the 2017 season, they knew they had potential to be great.

Success came quickly. In their first international competition together, they won Grand Prix gold. They capped that first season off by winning three-metre synchronized silver in Citrini-Beaulieu's debut at the world championships.

They've been racking up medals since then — and now they have Olympic hardware.

"After all the years with Melissa our goal was to have a great performance and that was the goal," Abel said. "For us it's not the colour that matters. It's about the performance that we gave. The chemistry that we have.

"This was the most important. We did exactly what we wanted to do."CBC