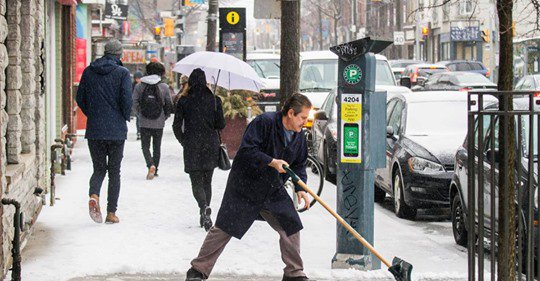 In case you're not already dreading the arrival of winter in Toronto, AccuWeather's 2019-2020 Canada winter forecast is here to tell us just how brutal it's going to get.

The forecast, which was released yesterday, breaks down winter weather predictions by province and region, and it's not looking great for Ontario.

"Our long-range forecasters say Ontario is expected to bear the brunt of stormy weather this season," the forecast states.

"The weather pattern has the potential to deliver several significant snowfall events to regions, including the greater Toronto area and into the Ottawa Valley."

And while other parts of Canada — like British Columbia — are expected to experience a fairly mild winter, Ontario isn't so fortunate.

The outlook states that December and January will be rather stormy, though the main storm track could shift farther east by February, which could lead to less snowfall by then.

The forecast also predicts an increase in spells of very cold air, which may result in localized lake-effect snow.

Not everyone should be discouraged by the forecast, however, as winter sports enthusiasts will enjoy favourable conditions for skiing and snowmobiling, according to AccuWeather.

"There is the potential for some significant ice or sleet events across interior southern Ontario, especially during the middle of winter," the forecast states.

Thankfully, Toronto isn't supposed to get its first snowfall until sometime in November, but we all know anything can happen during a Canadian winter. blogto