‘One last letter of thank you’: Gino Odjick and friend deliver final message 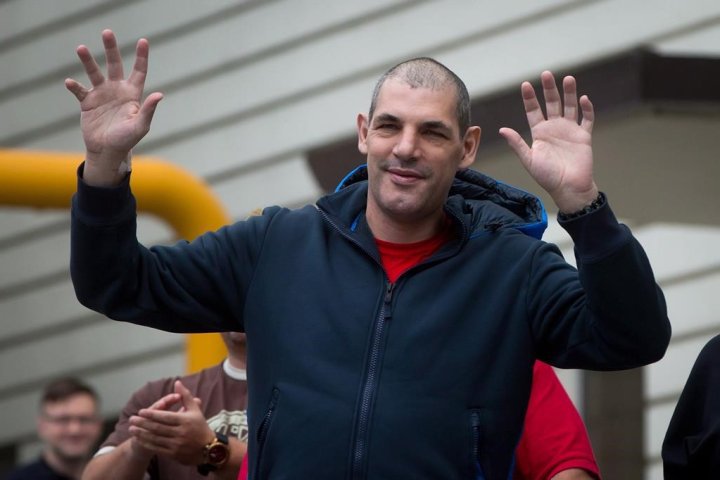 Former Vancouver Canuck and fan favourite Gino Odjick has left a final goodbye for the community he loved.

Odjick died earlier this week at the age of 52, nearly 10 years after a diagnosis of amyloidosis, a disease he says attacked his organs and his heart.

Beautiful final words from Gino Odjick and his best friend Peter Leech (@Halawgroup). This was sent to me to be shared with everyone who loved Gino ❤️ #GinoOdjick #Canucks pic.twitter.com/NlMUAxCxNe

On Friday, Odjick’s best friend Peter Leech, who was with the former enforcer in his final hours, shared a letter the pair had worked on together.

Addressed to Odjick’s fans, family (teammates) and friends, the missive is titled simply, “One last letter of thank you from Gino Odjick.”

What follows is the letter in its entirety.

First, please forgive us if this letter comes across as too emotional, we will try our best to maintain our focus. Back in 2014 when Gino first got sick with Amyloidosis, and we thought it was going to be the end of Gino’s life, he asked me to help and assist him with writing a letter to his Fans to say, thank you for all their love and support. The intention was we would do the letter together, which turned out that I did most of the heavy lifting with the letter.

He said you know me better than anyone else, he said I trust you with your words of help and assistance for me. We did three letters in total over the last nine years for his Fans. Hence, this is the last and final letter from Gino Odjick with the help and assistance of Peter Leech. Even though I am writing this letter, I am trying to maintain “We and/or Us”, for anyone who knew us, it’s always been that way.

He always thought of himself, with the quote we would share with the Indigenous youth in our workshops together, “We are two little old Indian boys” who grew up on the REZ, if we can do it, why can’t you do it. He never forgot where he came from, and who he was.

He was a proud Indigenous Canadian, and he truly loved being a part of the CANUCK NATION. Two years ago, out of the blue, he said the Canuck Nation spoil me, they spoil me with a lot of Love and Support, he truly loved it when he heard his name chatted in the entire arena, one day he said to me, look at the goose bumps on my arm, right after the fans cheered this name in the arena. He never got tired of those chants over the years, it was like medicine for him.

Even though he is not with us anymore, his legend is only going to grow, why, because I will make sure of it. He is one little old Indian boy who will never be forgotten. I am so proud and honored to been able to help and assist him on getting into the BC Sports Hall of Fame, he honestly didn’t think it was going to happen.

That was medicine for him and me, that gave us both a good lift. Again, I was honored to help and assist him with that, we would also like to thank Jim Robson, for his letter of help and support as well, we couldn’t have done it without Jim, thank you very much for that. Maybe someday the Canucks will honor him with the Ring of Honour, we hope someday soon.

It has not been easy these last few days, but the love and support of the entire Canuck Nation has been medicine for the family and me. I personally would like to thank every individual, and I will do my best to respond to all your messages personally.

I would like to thank my wife and children, for it was a team effort, in helping and assisting Gino over the years, and I know what my family would say, that’s what family does. Thank you to the Entire Canuck Nation because your family as well.

Thank you so much and Respectfully yours, Peter Leech on behalf of and for Gino Odjick.