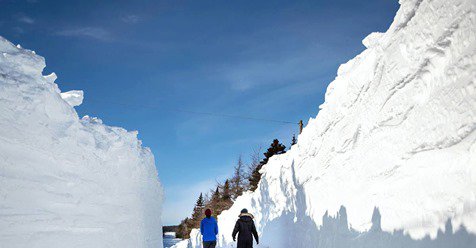 Residents of Newfoundland are still recovering from the record-breaking snowstorm that struck and completely shut down the province the weekend before last.

As cities continue to dig themselves out of gigantic snow drifts, parts of everyday life — including things like simply getting around — have completely changed in the wake of the winter storm.

During and after the storm, residents posted photos and videos of unfathomable grocery store lineups, snow baths, snowed-in doorways and the natural beer fridges they created, and cars completely lost in snow, among other unbelievable realities that the storm brought.

Now, more than a week after the snow has ceased, it seems that the area still isn't quite back to normal yet.

Just like many people had to tunnel out of their homes and off of their properties, Newfoundland drivers are finding that the streets are resembling snow tunnels too, with piles of the white stuff towering on either side of roadways.

The scene is a little claustrophobic, with snow banks so high that they completely block lateral vision at points.

Apparently, snowblowers and plows are still slowly working through the mess, so hopefully life will be back to business as usual for the communities that were the worst hit by the storm soon.

And until then, we can rest assured that locals will find a bit of fun and humour in a bad situation, in typical Newfoundlander fashion.