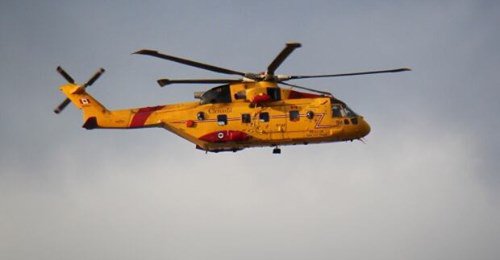 he mother of one of five fishermen still missing in the Bay Fundy says she has accepted her son won't be found alive, as searchers continue for a second day to comb a stretch of Nova Scotia coastline for signs of the crew of a scallop fishing vessel that hasn't been heard from since Tuesday morning.

CBC News has learned that Aaron Cogswell, Leonard Gabriel, Dan Forbes, Michael Drake and Geno Francis, along with captain Charles Roberts, were the six men on board the Chief William Saulis.

Late Tuesday evening, the Maritime Joint Rescue Co-ordination Centre (JRCC) announced on Twitter that the body of one of the six crew members had been found.

Lori Phillips said her son, Cogswell, 29, had been fishing with the captain of the vessel for seven years. She said his body was not the one recovered on Tuesday evening.

"I know he's not coming back alive, but I want him to come back home," she said in an interview.

"The province just lost six great people. Even though I don't know them, they had to be good. They're someone's family. Someone's missing them and I hope they all come home."

Phillips said her son was an amazing uncle and brother. Before he went out on his last fishing trip, Cogswell went to do his Christmas shopping, taking his nephew along and wrapping his gifts in preparation for the holidays.

Her son had high-functioning autism, Phillips said, and Roberts, the captain, took him under his wing.

"He was always there for him. He was his protector," she said, adding that her son "had his daily struggles, but he loved fishing and that's what he did."

Phillips said the Chief William Saulis was a newer boat. She said she's been waiting by the phone for news, but so far knows almost nothing about what happened.

The Chief William Saulis sent out an emergency beacon signal around 5:51 a.m. AT on Tuesday near Delaps Cove, N.S.

Debris was spotted from the air later that morning and two life rafts washed ashore, but no one was on board.

Lt.-Cmdr. Brian Owens, with the JRCC, could not say exactly where the remains were discovered. He said the body was found just before dinnertime on Tuesday.

"We had to notify the next of kin to make sure that they were fully aware," Owens said Wednesday.

No other crew members located as of 2 p.m. AT Wednesday
Owens said the person found was not wearing a floatation device.

Jacob Jacquard, a fisherman in Yarmouth, N.S., told the CBC's As It Happens on Tuesday that the crew would have had survival suits and life jackets on board. He said he believes most of the men would have been sleeping in their bunks.

"Even with the immersion suits … With how cold the water is, it would be very slim chances to find anybody alive."

Owens said while crews continued searching throughout the night, they did not find anyone else. As of 2 p.m. AT on Wednesday, the search was ongoing, but no other crew members had been located.

"Certainly our focus still remains hopefully finding these individuals and hopefully bringing them safely to their families," Owens said. 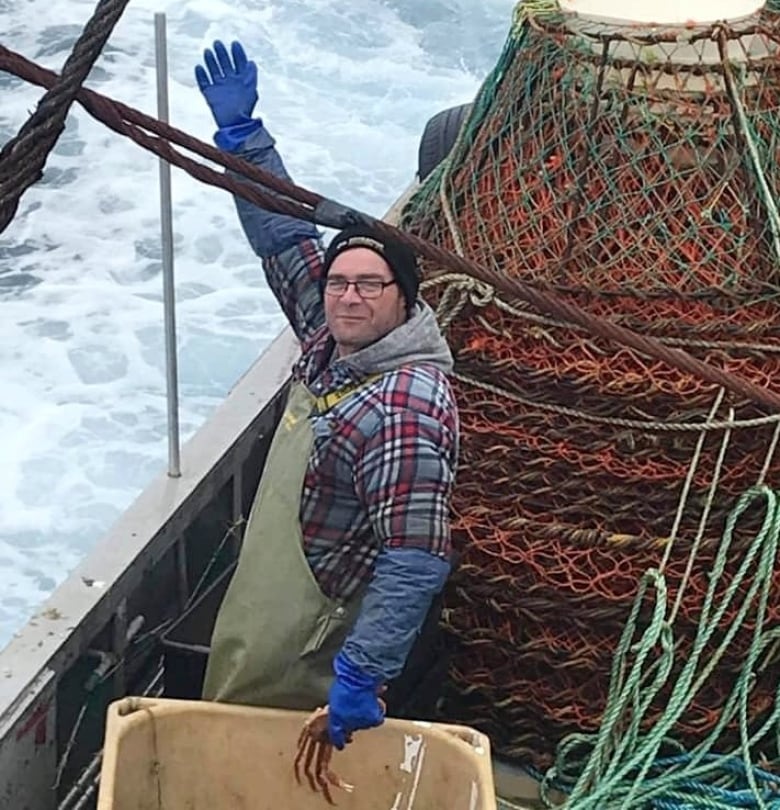 Michael Drake's oldest sister, Sandra Drake, said her family is devastated by the news. Her brother has two adult children and splits his time between Nova Scotia and his home in Fortune, N.L.

"He was so good. He was a good boy. Would help anybody," she said, describing her brother as very tough, and a good worker who always supported his kids.

Sandra Drake said their father was also a fisherman and that her brother began fishing as a young boy.

"He loved the ocean ... he lived on the water ... He was always so busy, you could never catch him and talk to him, because he was always on the boats or down the wharf working on the boats," she said.

'I just kind of put my head down and just prayed' 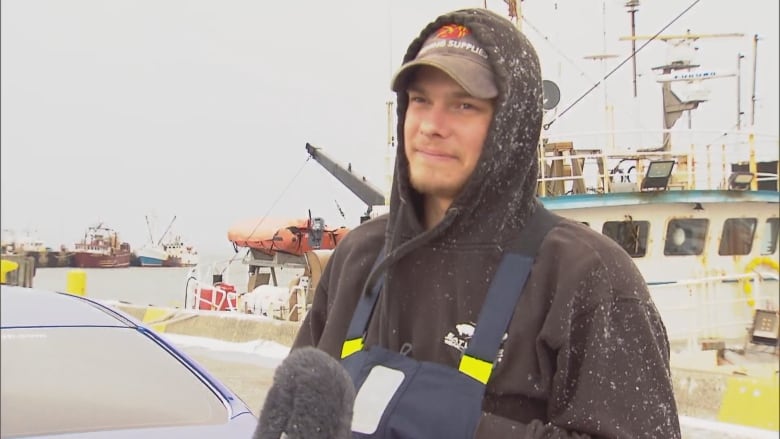 Alyjah Ritchie, a fisherman from Yarmouth, N.S., said Charles Roberts, the captain, is a family friend and carries the nickname Hot Dog around the wharf.

Ritchie said he spoke to Roberts just a few days ago and didn't want to believe it when he heard the boat was missing.

"But when I heard about it and I knew it was true, I just kind of put my head down and just prayed and hoped he was going to come home."

Ritchie said Roberts is a good man and an experienced fisherman.

Charles Roberts, captain of the Chief William Saulis, is among the six people who were on board the boat that sent out an emergency beacon signal early Tuesday morning. (Facebook)
"Whatever happened, it had to have happened quick."

Ritchie was heading out to fish for lobster on Wednesday morning. He said while conditions are much better than they were Tuesday, the dangerous nature of the job sits in the back of his mind.

"But like everybody else, you've got to keep going forward."

One of Canada's deadliest industries
The Nova Scotia fishing community has had its share of tragedies, and the industry remains one of the most dangerous occupations in Canada.

The Transportation Safety Board of Canada said 2018 was the deadliest year in over a decade, with 17 people dying aboard fishing vessels — seven of them in Nova Scotia waters. Between 2011 and 2017, there were 63 fishing vessel deaths across the country.

In February 2013, five young Nova Scotian fishermen were killed when a wall of water crashed into the Miss Ally during a storm, capsizing the boat and rocking the small communities of Cape Sable Island and Woods Harbour.

The RJL scallop dragger also made headlines in 2010, when its four crew members were killed in the Bay of Fundy. 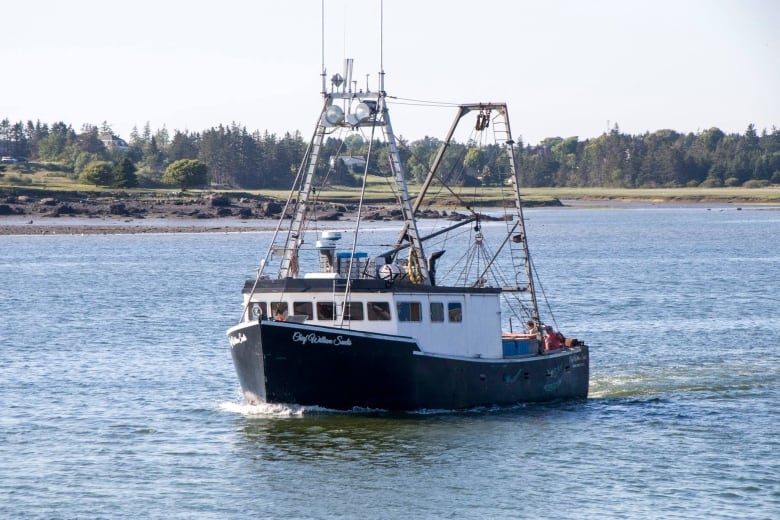 'Trying to make sense out of something so tragic'
People living in the communities along the Fundy Shore are waiting anxiously as the search unfolds.

Susan Robinson-Bernie is a resident of Parks Cove. She has two fishermen in her family who have been helping with the search.

"If you're not close to a fisher on the boat, you certainly know of these individuals around the wharves and in the other communities. Everybody knows somebody in the industry," Robinson-Bernie told CBC's Information Morning.

"So they're coming together, talking to each other, just trying to make sense out of something so tragic."

She said many families of fishermen, both past and present, are at the makeshift command centre at the Hillsburn United Baptist Church on Wednesday to show their compassion and support.

Many of the crew members are from the Yarmouth area.

"Fishing is not a job here, it's a way of life," the town's mayor, Pam Mood, told CBC's Maritime Noon.

"We line the shores just praying as the vessels go out with our friends, our family members on board. This is absolutely the worst news that you could ever get. Ever."

Weather warnings issued for area
A Hercules aircraft and a Cormorant helicopter from CFB Greenwood, along with three coast guard ships, were dispatched to help with the search, facing strong winds and high sea levels.

Environment Canada has issued another gale warning for the area on Wednesday, with winds reaching up to 35 knots. There is also a warning for freezing spray.

Ground search and rescue personnel are supporting efforts from shore, while other fishing vessels have also joined the search efforts.

Owens said while he hasn't heard directly from the squadron, he suspects the crews would be affected by the situation.

"But I'm sure it takes a bit of a toll on everyone to deal with a situation like we're dealing with right now." 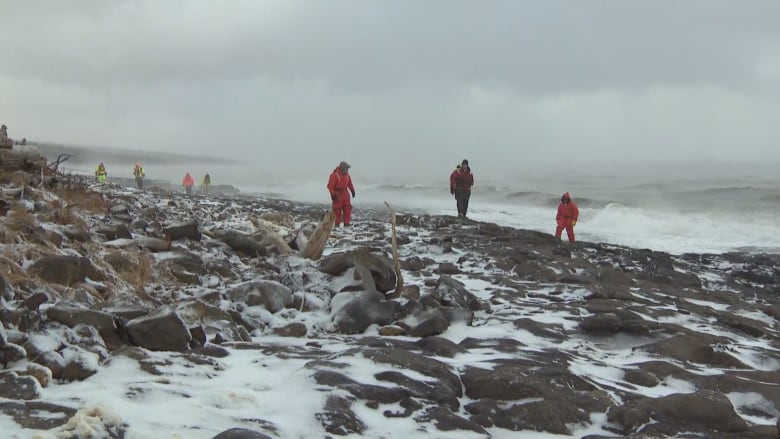 Search continues for people, debris
RCMP Cpl. Mike Carter said there are 25 to 35 personnel searching a 10-kilometre stretch of shore running east from Delaps Cove, an area being described as the "debris field."

He said they are searching for people and anything to give them an idea of what happened to the ship.

"Nothing so far can be identified directly to that vessel."

Carter said they are covering off high-priority areas before the tide comes in over the next two to three hours. He said they will be able to access more of the beach when the tide drops again in the afternoon.

He also said the rough seas on Tuesday and the temperature dropping to –10 C meant a lot of sea spray came up along the shore, covering the rocks with salt and ice and making for "very slippery, very hazardous conditions."

Carter said Nova Scotia's Emergency Management Office and the Department of Fisheries and Oceans are also offering their services on Wednesday. CBC