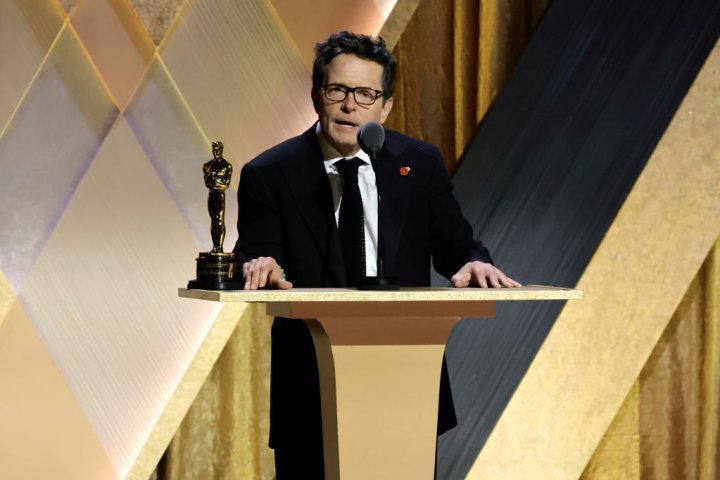 Beloved Canadian actor Michael J. Fox has been recognized with one of Hollywood’s biggest honours for the important advocacy and fundraising work he’s accomplished since he was diagnosed with Parkinson’s disease.

Over the weekend, the Back to the Future and Family Ties star was awarded with an honorary Oscar statuette — the Jean Hersholt Humanitarian Award — for his philanthropic efforts that have raised $1.5 billion for Parkinson’s research. The award is given to an “individual in the motion picture industry whose humanitarian efforts have brought credit to the industry,” according to The Academy’s website.

Presenting the award was Fox’s longtime friend Woody Harrelson. After Fox approached the podium he waited for the applause from a standing crowd to die down.

“Stop it. You’re making me shake,” he joked.

Fox’s emotional, and at times hilarious, acceptance speech opened with him quoting lines from Bruce Springsteen’s song No Surrender to sum up his experience with Parkinson’s disease.

“That is sort of a personal anthem of mine,” said Fox. “No retreat, no surrender.”

He spoke about his humble beginnings as a Canadian actor and high school dropout.

“I did leave high school in the 11th grade, sold my guitar and moved to L.A.,” he told the A-list audience, which included Tom Hanks, Brendan Fraser, Florence Pugh, Cate Blanchett and Jennifer Lawrence.

Fox was just 29 when he was diagnosed with the neurodegenerative disorder in 1991 that has increasingly diminished his mobility and speech over the years.

“I was told I only had 10 years left to work,” Fox said, talking about how his diagnosis came during the height of his acting career. “That was sh—y.

Fox, 61, told the crowd that he “entered into seven years of denial” while trying to make sense of his disease.

“The kid who left Canada, convinced that he would make anything happen just by working hard and by believing, now had a tall order in front of him,” Fox said. “I told very few people. And they kept my secret.”

For those seven years he continued to work. He was filming Spin City at the time, but knew he had to share his diagnosis with the public at some point.

So he went to the media and broke the news.

“What happened next was remarkable,” he said, becoming emotional, “The outpouring of support from the public at large and the beautiful reaction from all of my peers in the entertainment business.

“It struck me that everything I’ve been given — success, my life with (my wife) Tracy, my family — had prepared me for this profound opportunity and responsibility. It was a gift,” Fox said, quipping that he sometimes calls Parkinson’s “the gift that keeps on taking.”

Fox said, however, that the honorary Oscar isn’t about him — it’s about the good work that’s been done through the Michael J. Fox Foundation, which he set up in 2000, two years after he went public with his diagnosis. According to the foundation’s website, the $1.5 billion raised has helped fund or sponsor many clinical trials, has helped fund 20 early-stage therapeutic programs, has garnered 48,000 “citizen scientist” participants who are sharing their lived experiences with Parkinson’s and has helped build the largest dataset and biosample library in the history of the disease.

Fox, however, was humble about these incredible accomplishments.

“There was nothing heroic about what I did,” he said, going on to thank those who have supported his work and the many who are working in the field of Parkinson’s disease research.

Finally, he called up his wife of 34 years, Tracy Pollan, to the stage.

“I cannot believe I have been standing here for this long, it’s a miracle,” joked Fox, checking out the heavy statuette. “I cannot walk and carry this thing. But I ask Tracy to once again carry the weight.”