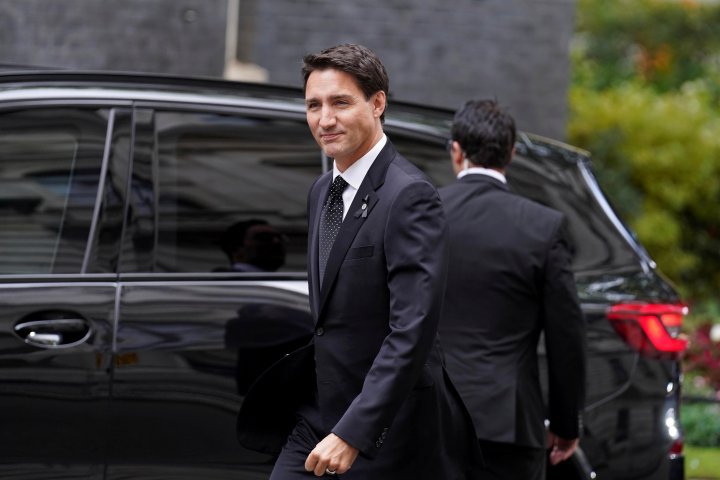 Prime Minister Justin Trudeau says the complicated process that would come with any attempts to abolish the monarchy are likely a “nonstarter” for Canadians amid pressing national problems like inflation, climate change and the need for continued work on reconciliation.

In an interview with Global News from London, U.K., where he is leading a Canadian delegation attending the funeral of Queen Elizabeth II, Trudeau reflected on what her death means for this country, and why he thinks Canadians have bigger things on their minds than abolishing the monarchy.

“We are able to have all the strength of debates that we need to have in Canada without worrying about the overarching stability of institutions because they are embodied by structures that have been in place for hundreds of years,” Trudeau said in the interview, which airs in full Sunday on Global National.

“Canadians have been through a lot of constitutional wrangling over the past decades. I think the appetite for what it would take when there are so many big things to focus on, is simply a nonstarter.”

Among the big challenges, he pointed to are inflation and the cost of living, climate change, greater clean technology jobs, reconciliation with Canada’s Indigenous peoples, and global affairs in what his defence minister, Anita Anand, earlier this year called a “darker” and “more chaotic” world.

Last week, Ipsos polling conducted exclusively for Global News just days after the death of the queen suggested nearly 60 per cent of Canadians want a referendum on the future of the monarchy.

That’s an increase from last year, when the sentiment stood at just over half of respondents.

At the same time, that poll suggested there is nearly equal support among those who favour both preserving or eliminating the ties to the monarchy.

In particular, the polling indicated King Charles III has a lot to prove with the Canadian public.

While 82 per cent of respondents said they approved of Queen Elizabeth’s performance as monarch, just 56 per cent agreed Charles will do a good job in her place. Even worse, only 44 per cent said they view Charles favourably, with that support dipping to just 27 per cent for his wife Camilla, the Queen Consort.

However, abolishing the monarchy would require a feat of political maneuvering that has rarely been seen throughout the years, requiring unanimous agreement among the House of Commons, the Senate and all of the provincial legislatures.

Trudeau said his impression of the new king is that he will be “steady and engaged and thoughtful like his mother was.”

“He knows Canada very well. He spent so much time there. He’s been active on protecting the planet, on engaging with people around the world. He’s very interested in Indigenous reconciliation,” Trudeau said.

“There’s a lot of good work to do that he is going to be able to to lead, within the limits and the position he has. But I think his commitment to listening, engaging, learning, embodying a thoughtful, generational path forward rather than short-term political preoccupations is exactly the kind of frame that I think democracies like ours need.”

Gov. Gen. Mary Simon, who is also in London as part of the delegation for the queen’s funeral, expressed similar thoughts in an interview with The West Block’s Mercedes Stephenson on Sunday.

Simon, who is the first Indigenous person to hold the position as the monarch’s representative in Canada, described King Charles as “very different” from his mother, while being “very committed to reconciliation … between Indigenous peoples and the Crown.”

“He has told me directly that he’s committed to working on these issues, and hopefully I’ll have a lot of opportunities to continue working with them,” Simon said in the interview.

Trudeau added he believes that rather than being an impediment to reconciliation, the Crown is “a powerful tool” in those efforts.

“It’s going to be a part of the path forward. Appointing the first Indigenous Governor-General, for example, was a key step forward in reconciliation,” he said.

“Having a King who is making deliberate efforts to learn, to understand, to embody a new relationship with Indigenous peoples that we’re developing as a country is essential.”

“Symbolic institutions are not just symbols. They also have the power to validate, recognize and legitimize people’s emotions and their lives and what they have gone through,” she said.

“And I think that holds a great strength and depth.”

The symbol that the monarchy represents, the prime minister added, also gives Canadians a powerful opportunity to “position ourselves in the sweep of history” as the Crown passes from the longest-reigning monarch in British history to the first King in 70 years.

“We know how fast everything moves and how complicated, how troubled the world is right now,” he continued.

“This is a moment to take stock, to reflect on where we’re going and what we’re focusing on and how we continue to be there for each other — in a world that is changing, but still has symbols of steadiness that we can anchor ourselves to.”