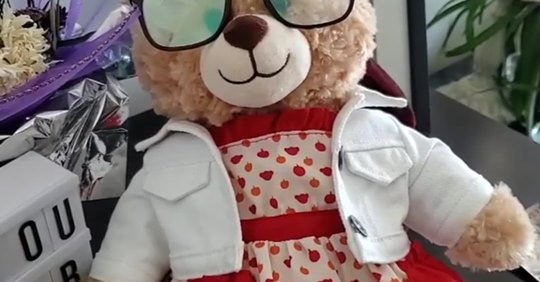 VANCOUVER (NEWS 1130) — When someone stole Mara Soriano’s backpack in Vancouver’s West End Friday they took her most precious possession — a bear given to her by her mother before she passed away.

The bear, which she calls Mama Bear, was in a backpack with all of Soriano’s most valuable belongings including her passport, her chequebook, and her electronics.

“Christmas of 2017 she had given me this Build-a-Bear with a lovely recording of her saying that she loved me, and that she was proud of me and that she would be with me wherever I was. I cherish this bear, I live in Vancouver now and my whole family is in Toronto and it’s one of the things that reminds me of home. I have it on my desk, I see it every day,” she tells NEWS 1130.

“I have nothing else from her with her voice from before she got sick that specifically tells me that she loves me, and she’s proud of me, and she’ll always be with me. I listen to it every time I miss her.”

In addition to having a recording of her mother’s voice the bear was designed to evoke the memory of her mom.

“It’s dressed like her. She wore these black wire-framed glasses all the time and the bear has them also. So she’s Mama Bear to me”

The search for the bear has gotten the attention of a Vancouver-born celebrity who is offering a $5,000 reward.

“I couldn’t sleep at all last night after the loss and all day today I’ve just been shaking. I’ve been looking in alleyways and dumpsters and have been trying to get the word out. Finding out that it got to someone like Ryan Reynolds and he’s retweeting it and so many people have seen it is just so shocking to me. I never thought it’d blow up to this point and I’m just so unbelievably grateful.”

Soriano says her backpack was stolen when she was moving from one West End apartment to another Friday around noon. A friend who was meeting her to help with the move called her and said he’d been hit by a bike.

“I dropped everything next to the U-Haul and then I ran to an Evo and went to drive toward him,” she explains.

When Soriano and her fiance were unpacking she realized the backpack was gone. She made a police report and reviewed the surveillance footage from outside of the building.

“There’s clear footage of him looking around to see if anybody was watching and then he just picked it up and ran into the alley,” she says.

She wants whoever took the backpack to know Mama Bear is the only thing she wants back.

“That bear meant everything to me. They can keep everything in that bag. I don’t care about the electronics, I’ll get my passport replaced. No questions asked, please bring back the bear.”

The Vancouver Police Department is asking anyone who has information or finds the bear to call them at 604-717-3321.