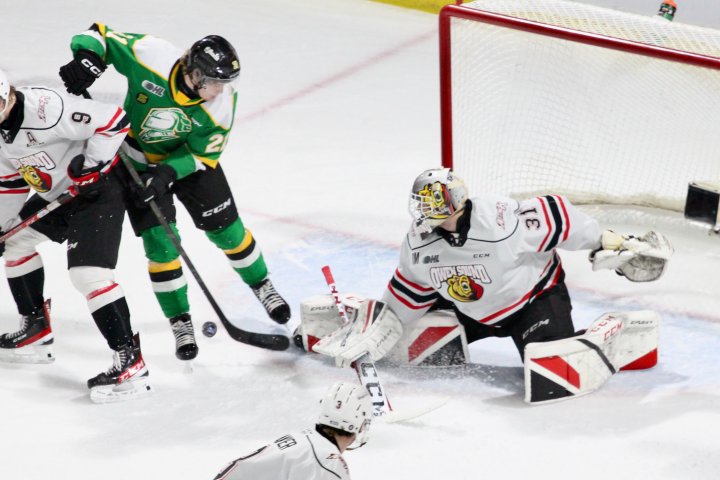 George Diaco had a goal and three assists as the London Knights blasted the Owen Sound Attack 9-1 at Budweiser Gardens on Friday night.

Diaco was one of nine Knights players who had multi-point games.

Brody Crane had a pair of goals, Logan Mailloux had three assists and for the second game in a row Ryan Winterton had a goal and two assists.

Winterton has nine points in seven games as a Knight. He scored London’s first goal of the game as he snapped a shot over the shoulder of Attack goaltender Nick Chenard at the 2:06 mark of the first period.

Denver Barkey and Brody Crane followed that up with goals just 44 seconds apart that showed off the speed of both players and put London ahead 3-1 less than 13 minutes into the game. Barkey ended the game with a goal and an assist.

The Knights clicked on the power play for the third time in four period as Mailloux found Ryan Humphrey to the left of the Owen Sound net and he banged the puck in from there and London led 4-1 through 20 minutes.

All of those goals came after Landon Hookey had opened the scoring just 14 seconds into the game on a backhand that the Sarnia, Ont., native let go as he cut into the high slot.

Corbin Votary replaced Chenard in the Attack goal to begin the second period but the Knights kept rolling. Sean McGurn connected with Diaco for the Londoner’s 20th goal of the season and a 5-1 London lead.

Then McGurn scored his 18th of the year with a shot that went right along the ice and past Votary to make it 6-1.

A collision that wiped out two Attack defenders in the final minute opened up a lane to the Owen Sound net for Landon Sim and Ruslan Gazizov and they played give-and-go and Sim banged in the final goal of the evening and Gazizov’s second point of the game.

Isaiah George and Oliver Bonk each picked up a pair of assists.

London, Ont., native Ethan MacKinnon returned to the lineup after missing 16 games with an upper body injury and was a plus-4.

The Knights outshot the Attack 40-29.

Former London Knights captain Bo Horvat was named to the 2023 NHL All-Star game after voting by fans was tabulated. Horvat’s big-time numbers and his future with the Vancouver Canucks have been a major topics of conversation in Vancouver, B.C., this year. The Rodney, Ont., native has 30 goals this season with the Canucks and was 6th in goals per game at .63 for the 2022 calendar year.

The Knights and Kitchener will play a rematch of Tuesday’s 7-3 London victory when they go head-to-head at Budweiser Gardens on Sunday at 2 p.m.

So far the Knights are 2-0 against the Rangers this season. London has outscored Kitchener 11-3 in those two games.

Kitchener is still fighting to get into a playoff spot and will be playing their third game in less than 48 hours.