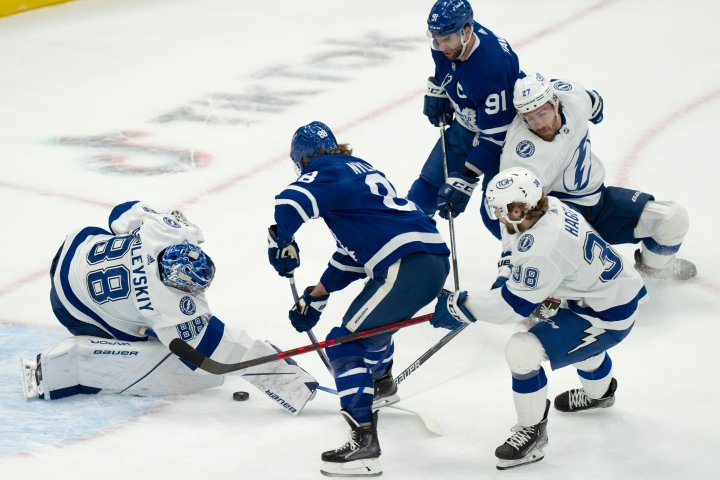 TORONTO — The Tampa Bay Lightning find themselves in unfamiliar territory — a loss away from elimination in the Stanley Cup playoffs.

The Lightning head back to Amalie Arena trailing the Toronto Maple Leafs 3-2 in their best-of-seven opening-round playoff series after a 4-3 loss in Toronto on Tuesday. Game 6 is Thursday.

The two-time defending NHL champion Lightning, who gave up a 2-0 first-period lead in the loss, said they trust that they’ll regroup.

“It’s never a good thing when you lose two in a row in the playoffs,” said defenceman Victor Hedman. “So, we take it upon us and we want to rebound.”

The Lightning beat the New York Islanders in the Game 7 in last year’s Stanley Cup semifinals. Their previous Game 7 was in 2018.

“We haven’t been in this situation too many times, facing elimination,” Hedman said. “We believe in ourselves. That’s the bottom line. They’re a great team, we gotta expect their best but, you know, we’re going back home . . . we trust in our group and trust in ourselves.”

The Lightning ran roughshod over the Leafs in the first period, with a 14-4 shots-on-goal differential.

“Obviously a tremendous start for us and the start that we wanted,” Stamkos said.

But Toronto killed off a five-on-three power play when Mark Giordano was assessed a minor penalty for cross checking with William Nylander already in the box. Stamkos called not capitalizing on that opportunity a “bad omen.”

“We’re gonna regroup here. We know it’s going to be a tough series,” he said. “Those guys are good over there. But we have a group that has responded well to these types of situations for a long period of time, so we know what to expect heading home, and we’re ready.”

The Lightning, the No. 3 seed in the Atlantic, arrived in Toronto on the heels of a 7-3 blowout in Game 4 in Tampa.

The Leafs, meanwhile, have become infamous for their trouble closing out series. But McDonagh said his team takes no comfort in that.

“We’re not looking too far ahead,” he said. “We’re just looking forward to playing at Amalie in front of our fans and get the momentum going right off the start and trying to execute our game plan.”